The National Wildlife Federation has partnered with biologist Craig Thompson of the U.S. Forest Service and the Integral Ecology Research Center to help support important research and conservation initiatives for the Sierra Nevada fisher.

Unfortunately, habitat loss from development, forest clearing and fires, along with other environmental threats have taken its toll on the animal throughout the Sierra Nevada. Fishers have disappeared from 50% of their range in California and just two native populations survive. 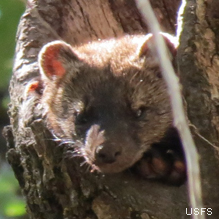 Fishers in the Western United States

The research is designed to identify the many different threats facing fishers in the western United States, such as habitat loss through wildfire and fuel reduction, or increased mortality through mechanisms such as altered predator dynamics or poisoning associated with illegal marijuana grows.

Craig and his team hope to use this information to help guide management in ways that can achieve both fire resiliency and forest carnivore conservation. They began in 2007 and have worked throughout the Sierra Nevada region.

Fishers are small carnivorous mammals, members of the weasel family and native to North America; while they are relatively common in the Northeast and Midwestern United States, Fishers are one of the rarest carnivores in the Northwest. Fishers prefer large areas of dense, mature coniferous or mixed forest, and when these forest become disrupted, they can face a myriad of threats. Past fire suppression has created large areas on homogenous forest with extensive fuel loads — when a fire hits now, it overwhelms the forest's natural resiliency and can create massive areas of uniform forest types (or lack of forest). Given climate change, these areas may develop into entirely new ecosystems, making a home look very different and difficult for the fishers.

Thinking in New Ways: Our understanding of what fishers need is misleading because it's based on what we see them using now and not what they would have been using 100 years ago when the landscape was fire resilient. By improving the current understanding of forest carnivore habitat requirements, Craig hopes to help find middle ground between protecting the landscape and conserving the habitat.

Anticoagulant Rodenticide: Toxic chemicals used to rid rodents from illicit marijuana gardens in the Sierra Nevada range and elsewhere in California may be inadvertently poisoning many of the remaining fishers. Educating people on the use of anticoagulant rodenticides is a primary concern for not only the fisher population, but for all wildlife.

Learn more by watching the USFS Restore video series for the region, which highlights different ecological restoration topics, such as Marijuana Grows and Restoration and Fire Restoration.

Craig Thompson is a research wildlife ecologist with the US Forest Service, Pacific Southwest Research Station. For the past 10 years he has been working with carnivores in the Sierra Nevada region, investigating the impacts of USFS management activities and looking for common ground between habitat conservation and the creation of fire resilient landscapes. He received his PhD from Utah State University in wildlife ecology and an MS degree in landscape ecology from the University of Massachusetts, Amherst. He also holds the dubious honor of being the regional USFS expert on wildlife poisoning associated with illegal marijuana cultivation on public lands.