The National Wildlife Federation is working in collaboration with researchers Bill Leikam and Greg Kerekez to advance research on wildlife in Silicon Valley and advocate for the critical habitat linkages required to ensure a healthy future for people and wildlife. 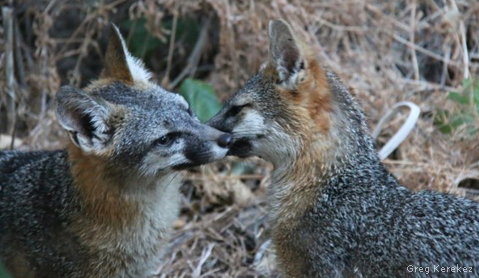 Bill Leikam and Greg Kerekez have a vision, together they have formed the Urban Wildlife Research Project (UWRP). Beyond studying the behavior of foxes and detailing scientifically important activities such as "fox kisses," communal raising of young, and mating behaviors, Bill and Greg are charting something vital to the future of foxes and all wildlife in Silicon Valley. They want to create a comprehensive San Francisco Bay Area Wildlife Corridor to ensure the protection of the region's natural heritage. Bill notes, "I think we are seeing some of the original ancient passageways are partially intact and that the animals in some cases are not giving up, even with cities moving into their areas."Citizen science techniques are used to study how the wildlife of Silicon Valley and San Francisco Bay Area are adapting (or not) to an increasingly urban environment. Some of the focus species are gray fox, beaver, and burrowing owl but they research any creature caught on their trail cameras. They map the corridors these animals use to move through the landscape, from the Bay to the mountains.

The ultimate goal that this campaign is working towards is creating connectivity and linkages for wildlife so the species can continue to live and thrive as humans continue to do the same. It is about living in harmony and unison with wildlife and incorporating nature into our lives as we urbanize.

Gray foxes, Urocyon cinereoargenteus (the Latin name translates to "bushy-tailed dog of ashen silver"), can be identified by the color of their coats, which are a silver-gray on the back and face, reddish-brown on the legs and chest, all accompanied by a long bushy tail with a black stripe. The gray fox is the only member of the dog family that can climb trees! They are located throughout most of the United States and eat a wide variety of foods.

Researcher Bill Leikam (left) is nicknamed The Fox Guy, a moniker that's been well earned. Having spent thousands of hours in the field observing, he is the Jane Goodall of the gray fox world, immersing himself in the study of the urban foxes of Silicon Valley as fully as Jane Goodall did the chimpanzees of Gombe. Science has been a fundamental part of Bill's life, starting when he was just a teenager. In the 1970s, he conducted original research into the nature of consciousness that led to being chosen in 1981 as one of an 18-member Scientific Delegation to the People's Republic of China where he presented his research. During the 1980s he spoke at conferences across the country, both on consciousness and the psychology and neurophysiology of boredom. Six years ago Bill began documenting, photographing, and researching the behavioral characteristics of the gray fox, something that had never before been done in such a comprehensive way.

His research partner, Greg Kerekez, is a wildlife conservation photographer. Greg uses photos, combined with citizen science, to aid in wildlife conservation and public education. He is an Instructor for the Youth Science Institute and is a docent Naturalist for several non-profit organizations. Greg is currently working on a documentary series about the natural diversity and history of Santa Clara County entitled "Silicon Valley of the Heart's Delight." He is credited with capturing the first videos of a beaver living on the Guadalupe River in San Jose, CA.

Connect with the Urban Wildlife Research Project on Facebook!