Bays in Peril: A Forecast for Freshwater Flows to Texas Estuaries 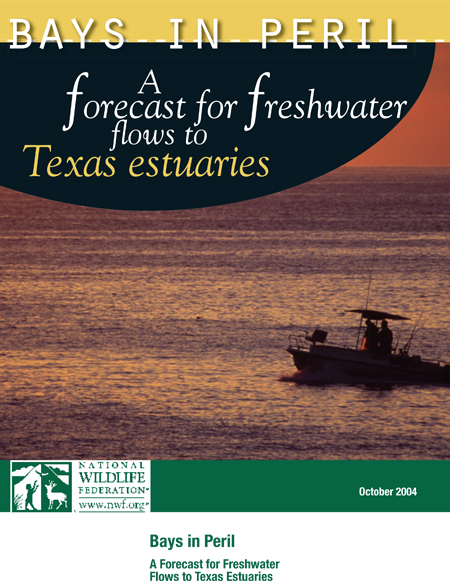 In this report, the National Wildlife Federation takes a first-ever look at what would happen to the inflows to Texas’ seven major estuaries if existing water permits were fully used and wastewater reuse increased. We projected what freshwater inflows would be for each estuary if holders of all existing permits withdrew their full authorized amount of water and if the amount of wastewater that was reused rather than discharged back into the river increased to roughly 50 percent.

While this ‘future use’ scenario may seem somewhat hypothetical, we believe these conditions are likely to be seen in the not-too-distant future if Texas does not change how it manages water. In addition, our analysis considers only impacts from current water permits and does not attempt to account for new water-use permits that are likely to be issued.

Having determined the freshwater inflows each bay would receive under ‘naturalized conditions’ and under our ‘future use’ scenario, we then looked at how the future-use inflows stack up against what each estuary system needs to stay healthy.

The results of our analysis are troubling, with five estuaries receiving a ‘danger’ ranking. During dry times, four of Texas’ seven major estuaries would face serious problems under the ‘future use’ scenario, with sustained periods of very low flows happening much more frequently than under ‘naturalized conditions.’ During these low flow periods, many species are on life-support and are just able to survive. If they are on life-support too often or for too long, they may be unable to recover quickly, or at all, when inflows increase with wetter times. The key spring and early summer inflow pulses needed to support strong productivity would not be impacted as heavily. Two of the seven major estuaries would face very large increases in the number of years with reduced spring and early summer inflow pulses.

In this report, the National Wildlife Federation takes a first-ever look at what would happen to the inflows to Texas’ seven major estuaries if existing water permits were fully used and wastewater reuse increased.