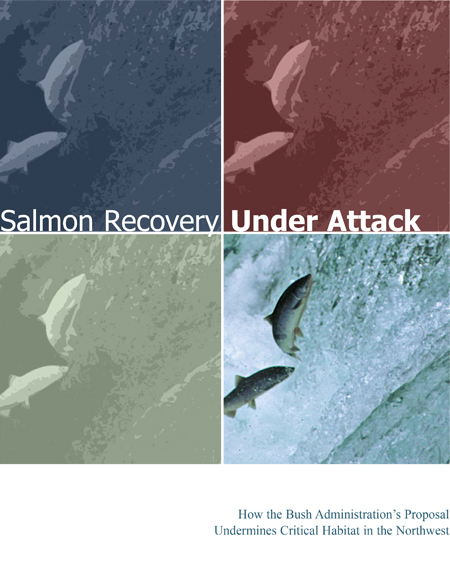 In November 2004 the Bush Administration proposed to remove longstanding protections for rivers and streams identified as essential to the recovery of imperiled salmon and steelhead in the Pacific Northwest. The proposal would fundamentally alter the course of salmon recovery under the federal Endangered Species Act (ESA), which recognizes that protecting habitat is a foundation of species recovery.

U.S. Fish and Wildlife Service data indicates that species with critical habitat designation under the ESA are more than twice as likely to be improving than those without. Salmon are at risk of extinction because so much of their historic habitat has been lost to industry, agriculture, dam construction, pollution and unchecked sprawl. Recovery depends on restoring the health of rivers, streams, estuaries and shorelines where salmon once lived, yet the Administration would eliminate protection for these currently unoccupied habitats.

The proposal would also remove critical habitat protection under the ESA in favor of federal and state plans and policies that were never intended to recover salmon, such as the Northwest Forest Plan, the Oregon Plan for Salmon, and forest plans in Washington and California. The Administration’s proposal would also exempt protection for the entire mainstem of the Columbia River, the heart of Northwest salmon country.

Eliminating protection for vital feeding, rearing and spawning grounds threatens to undermine recovery efforts throughout the region, where salmon are an important economic engine for coastal and rural inland communities. For example, a recent study found that the re-emergence of robust salmon and steelhead fisheries in Idaho would generate $540 million in economic activity in the state annually.

The proposal for critical salmon habitat is part of a broader scheme by the current Administration and its allies to dismantle the Endangered Species Act. Legislation introduced by Congressman Dennis Cardoza (D-CA) in April 2005 threatens critical habitat designation for all species currently protected under the ESA. The Cardoza bill mirrors the Administration’s proposal for salmon by blocking protection of habitats currently unoccupied, but essential to recovery, and by exempting areas covered by state and federal plans and polices that were never intended to replace ESA critical habitat protections. This report describes how the Cardoza and Administration approach would fundamentally undermine the recovery goal of the ESA by attempting to manage species at the brink of extinction rather than seek to establish well-distributed viable populations.