Fueling the Fire: Challenges Facing the Fish, Wildlife, and Habitat of the American West 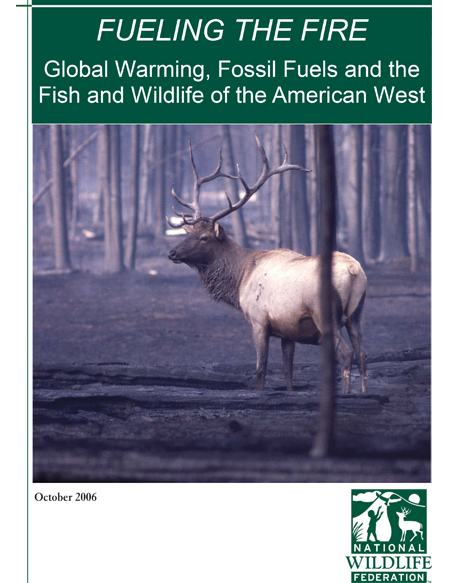 For millions of people, hunting, fishing and other outdoor traditions are an important part of life in the American West. But America’s addiction to fossil fuels is coming at an enormous price, one that threatens not only people but the fish, wildlife and ecosystems that are so fundamental to the region’s— and nation’s—economy, culture and values.

Above all, burning coal, oil and gas is the driving force behind global warming, which will dramatically alter the western landscape if left unchecked. Indeed, the growing body of evidence that global warming is already having an impact on natural systems is a strong warning: without meaningful action to reduce now emissions of carbon dioxide and other heat trapping gases responsible for the problem, the western U.S. faces greater risks ahead.

Making matters worse is the fact that many continuing problems in the American West, including habitat fragmentation, invasive species and growing demands for water resources, have degraded wildlife habitat and reduced the resiliency of wildlife species to cope with the impacts of global warming that are already underway. Ultimately, it is the combination of global warming and these other human-induced problems that will fundamentally change the West’s unique and diverse natural systems unless the region and nation takes a much more concerted effort to implement solutions.

Fortunately, solutions are at hand. Effective and affordable technologies are available that can significantly improve the energy efficiency of buildings, appliances, cars and trucks. In addition, clean, renewable energy sources such as the sun, wind and biofuels are becoming increasingly affordable and have tremendous potential to diversify the region’s and nation’s energy portfolio.

This report calls for a meaningful strategy that should include the following actions:

Fueling the Fire explores the impact fossil fuels are having on the fish, wildlife, and habitat of the American West.