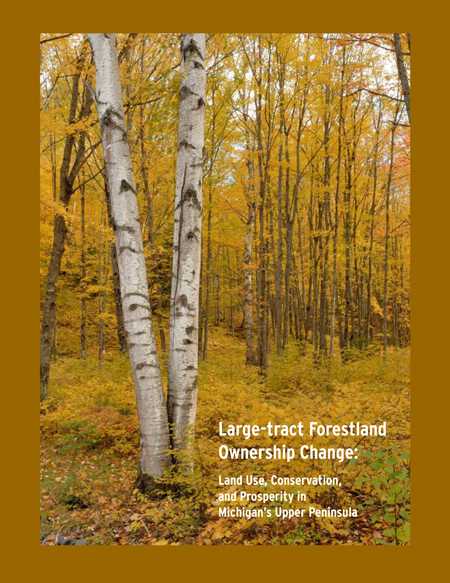 Powerful changes have marked the upper peninsula (UP) of Michigan's forestlands during the last 150 years, from the near-complete harvesting of old-growth trees during the 1800s to the increasingly sustainable management regimes enlisted by many forestland owners in recent decades. There have been remarkable constants throughout these changes: Public access to much privately- owned forestlands has been largely maintained; fragmentation of those lands has been minimal; and the resulting identity of the UP as a “place without fences” has sustained a culture grounded in outdoor recreation and freedom to roam.

Major and fast-moving changes in forest property ownership patterns during the past two years signal significant changes for the UP forests, the public’s access to them, and the natural resources that depend on them. This project aims to provide information relevant to local and state planning processes and to inform the public debate about the menu of public policies, investments and incentives that might be appropriate to address the changes and forces impacting the UP. The debate under way now will determine the future of the UP’s economy, nature and legacy.

Our research shows that the vast forest tracts are already getting smaller. In general, contiguous corporate holdings in the UP have been decreasing in maximum area. Great Lakes shoreline lands, arguably the most valuable and lucrative, are becoming increasingly owned by small private land holders, and therefore less accessible to the public. Forestland adjacent to inland lakes also is being divested by large corporate holders.

As a starting point for action, four strategies and 22 recommendations are presented in this report to better promote the stable, sustainable ownership and management of the UP’s large-tract commercial forestlands. They include fostering stewardship of private land, protecting exceptional resources, strengthening the economies of rural communities and promoting informed decisions.

A discussion of land use, conservation, and prosperity in Michigan's upper peninsula.