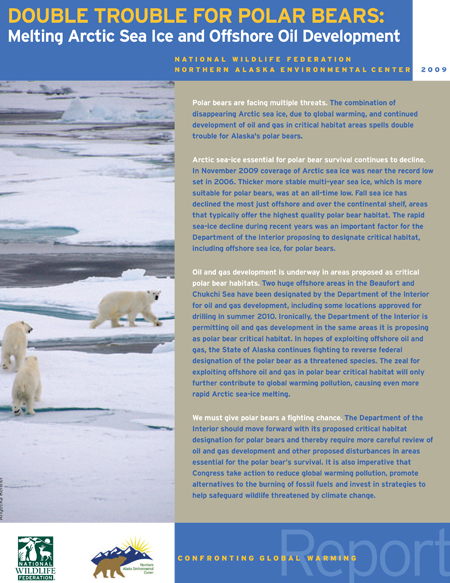 "The Department of Interior is undermining its own efforts to protect polar bears by promoting oil and gas development in some of the same areas it proposes to designate as critical habitat," said Dr. Doug Inkley, senior scientist at the National Wildlife Federation. "If ever there was a case for erring on the side of caution this is it. Instead, DOI is recklessly moving forward, handing out permits such as the one earlier this month allowing Shell Oil to drill in Alaska's Chukchi Sea as early as next summer."

"We just witnessed one of the North Slope's largest oil spills in its history," said Pam Miller, Arctic program director for the Northern Alaska Environmental Center. "Oil extraction is even more challenging at sea than on land, where an average of 453 oil and other toxic spills per year occurred between 1996 and 2008 on the North Slope oil fields."

In addition to the threat of oil and gas development, global warming continues to cause declines in the sea ice that polar bears need to survive, including within the area proposed as polar bear critical habitat. According to the report, sea-ice extent during in October and November, 2009 was the third lowest on record, at 19 percent and 9 percent below the long-term average, respectively.

"The sea ice is melting faster than previously projected," said Dr. Amanda Staudt, climate scientist at the National Wildlife Federation. "For the first time this year, commercial cargo ships were able to traverse the Northeast Passage and the Northwest Passage saw its first commercial use in 2008. Some scientists now say that the Arctic could be free of sea ice in late summer by as early as 2012."

"These trends in Arctic sea ice are particularly alarming for mother polar bears and their newborn young," said Dr. Sterling Miller, senior wildlife biologist with the National Wildlife Federation. "The decline in multi-year sea ice means fewer suitable areas of denning and foraging habitat for polar bears. The reported drowning of polar bears is a disturbing sign of the increasingly long distance between their sea ice habitat and denning habitat on land."

The report lays out several steps to give polar bears a fighting chance:

"The plight of the polar bear highlights the plight of our planet," said Inkley. "The news coming out of the Arctic increases the urgency for world leaders gathered in Copenhagen to agree on a plan to reduce the pollution that threatens wildlife and our own future."

The combination of disappearing Arctic sea ice, due to climate change, and continued development of oil and gas in critical habitat areas spells double trouble for Alaska's polar bears.