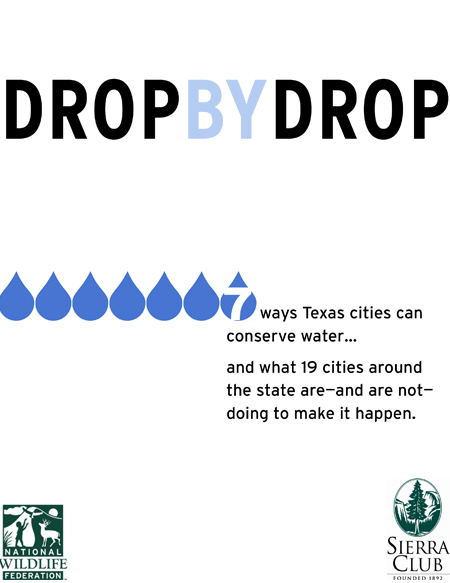 Managing and protecting water resources is one of the most critical issues facing Texas today. Demographers are predicting the state’s population will double by the middle of the century, putting more pressure on existing water supplies. At the same time, climate scientists are warning us that climate change could cause severe droughts in Texas more often than in the past.

The impacts on the state’s natural resources could be dramatic. Our rivers, streams and aquifers are already under stress. In many river systems, the state has issued more water rights than would be available during dry years, while many aquifers are being pumped faster than rainfall can replenish them.

In the face of this emerging reality, it only makes sense for Texas’ cities to manage their water supplies as effectively as possible. Increasing water-use efficiency allows communities to do more with the water supplies they already have, and postpone or even eliminate the need for expensive and environmentally damaging new water supplies such as reservoirs or long-distance pipelines.

This report surveys conservation programs in 19 cities around the state. The findings indicate that the quality and extent of water conservation programs in Texas’ cities vary considerably. The cities included in the report are: Arlington, Austin, Beaumont, Brownsville, College Station, Corpus Christi, Dallas, El Paso, Fort Worth, Garland, Houston, Huntsville, Katy, Laredo, Lubbock, Pasadena, Plano, San Antonio, and Tyler. The cities represent a diversity of population size, water sources, and geographic location; but they share one thing in common: all were required to submit new or revised water conservation plans to the State of Texas in 2009. Those plans, augmented by additional research, provided a major source of information for the new report.

The report describes and recommends seven efficiency measures that have a proven track record at reducing water use. The cities surveyed were rated on several of those measures. The measures include:

Water Pricing Structure: The report recommends a strongly tiered rate structure with affordable prices for those who use water efficiently and effectively higher water rates for customers who use excessive amounts of water. Austin was the only city whose residential use pricing structure earned a "Strong" rating, while Beaumont, Lubbock and Plano all had rate structures that, when assessed as an effective rate, offered significant discounts for high users, thereby encouraging wasteful water use.

Water Savings Goals: Texas cities are required to create conservation plans with five- and ten-year water use reduction goals, however many cities set easily-achievable but not very impressive targets. Dallas, for example, had the highest rate of per capita water use in our review and committed to just a modest reduction. On the other hand, San Antonio-which has already achieved impressive reductions in per capita water use-committed to continued reductions.

Toilet Replacement: New high-efficiency toilets can save 12,000 gallons annually over older models, but only six cities in the review had active programs encouraging the replacement of inefficient toilets.

Outdoor Watering: In Texas, a significant amount of treated drinking water is used for watering lawns. The Texas Water Development Board estimates that over half this water is wasted due to overwatering or run-off. Only two cities in our survey - El Paso and Austin - had "Strong" outdoor watering ordinances while ten cities placed no restrictions at all on outdoor watering.

The report describes and recommends seven efficiency measures that have a proven track record at reducing water use.