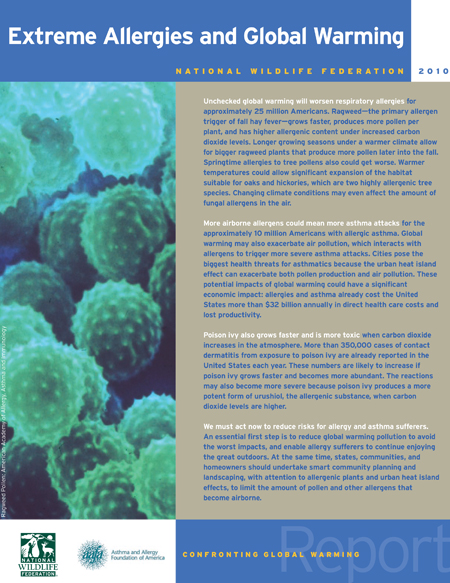 Unchecked global warming will worsen respiratory allergies for approximately 25 million Americans. As detailed in the National Wildlife Federation’s report Extreme Allergies and Global Warming, many allergy triggers will worsen as a result of climate change unless action is taken to curb global warming pollution and prepare communities for the changes to come.

Spring a mixed blessing for allergy sufferers. Tree pollen is the most common trigger for spring hay fever allergies. With spring arriving 10 to 14 days earlier than it did just 20 years ago, pollination is already starting sooner. New maps in the report show projected increases in habitat conducive to more allergenic trees.

Global warming is especially bad news for the millions of asthmatics in the United States whose asthma attacks are triggered by allergens. They will have to cope with more abundant and severe allergens plus likely increases in ground-level ozone pollution, particularly in urban areas. High ozone concentrations can trigger asthma symptoms and make bronchial airways less able to cope with allergens.

The report warns that fungal spores, poison ivy and even allergic reactions to bee stings could be on the increase.