Staying Hooked on a Dirty Fuel 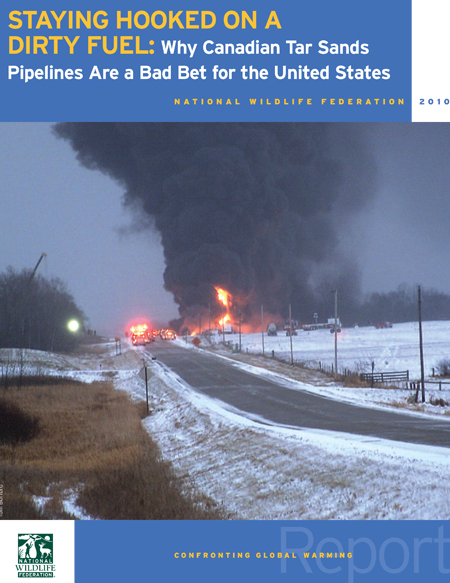 The report looks at the dangers of tar sand both to the Canadian and American environment, and global threat they pose because they emit higher greenhouse gas emissions than oil or gas.

British Petroleum’s Deepwater Horizon tragedy off the Louisiana coast, which killed 11 men and is an unfolding ecological disaster, is not an argument to expand Canadian tar sands development, as some have argued. The Gulf Coast catastrophe should instead propel us away from a future of diminishing returns and higher costs from “unconventional” fossil fuel extraction, which includes tar sands, oil shale and coal-to-liquids. Moving deeper into tar sands would be taking the country down the wrong path—one that leads to an inevitable dead-end.

Web of Dangerous Pipelines Spreading Across the U.S.

The tar sands industry aims to create an extensive web of pipelines to deliver increasing amounts of this Canadian tar sands sludge to refineries in the United States. The U.S. federal government has already approved two dedicated tar sands pipelines and is poised to approve a third.

The Keystone XL pipeline would cut through America’s heartland, running nearly 2,000 miles from Alberta down to Port Arthur, Texas, where the tar sands will be refined into transportation fuels. Other, shorter pipelines are envisioned to run to refineries around the country. This network of tar sands pipelines would deliver even more pollution to refineries where and the surrounding communities, which are already experiencing health effects.

The proposed Keystone XL pipeline will traverse rivers and carve across prairies, will flow on top of vital aquifers, and threaten farmers, ranchers, and wildlife when it leaks or breaks, as it unquestionably will.

Building this new pipeline would institutionalize a demand for a product that we do not need—especially if we seize the initiative to wean ourselves from this a fuel that is sullying our coasts, tearing up our heartland, and destroying the health and livelihoods of communities. Current projections are that the new pipeline would not even run close to capacity, raising the question of why the U.S. is even considering this project.

Promoting the growth of the Canadian tar sands industry is a dangerous and foolhardy development. This pipeline system would virtually assure the destruction of swaths of one of the world’s most important forest ecosystems, produce lake-sized reservoirs of toxic waste, import a thick, tarlike fuel that will release vast quantities of toxic chemicals into our air when it is refined in the U.S., and emit significantly more global warming pollutants into the atmosphere than fuels made from conventional oil.

Communities that live near the tar sands are already experiencing health problems linked to the pollution, and dozens of wildlife species are at risk, including millions of migrating cranes, swans, and songbirds. If Keystone XL crosses our border, it will cut through thousands of miles of sensitive habitat in America’s heartland. When the tar sands are refined in U.S. facilities, the resulting pollution will foul our air and water.

We believe that the U.S. needs clean and renewable energy solutions as we make the inevitable and necessary transition to a post-oil world. Tar sands, as well as other inferior fossil fuels like oil shale, simply should not be part of the equation. Tar sands are a starkly inefficient, polluting, ecologically disastrous and expensive way to power our cars and trucks. Each tar sands pipeline our government approves further increases our dependence on this dirty fuel. These pipelines will become, in effect, a longterm, government-approved pollution delivery system.

If we allow all these pipelines to be built, we are essentially saying that we are willing to feed our oil habit, even if we know it will harm our air, water, health, prosperity and planet. Agreeing to increase our imports of Canadian tar sands represents the worst kind of addictive behavior: "persistent compulsive use of a substance known by the user to by physically, psychologically, or socially harmful."

Why then, we ask in this report, is the U.S. poised to allow this expanded pipeline network that will lock our country into an ongoing reliance on the dirtiest of fossil fuels?

It is time to apply every ounce of American ingenuity to finding a technological path to a future that relies far less on oil and other fossil fuels and far more on sources of fuel that are renewable, sustainable, and clean. By applying the talent and technology of America’s best minds and businesses, this country can dramatically improve our environment and accelerate our move beyond a dirty energy economy.

We have arrived at a critical crossroads that will determine whether we can break free from this dependence—or lash ourselves tighter to it. Building new pipelines to import billions of barrels of dirty fuel from Canada is taking the wrong path into increasingly hazardous terrain. We should tell our elected leaders to reconsider.

Staying Hooked on a Dirty Fuel: Why Canadian Tar Sands Pipelines Are a Bad Bet for the United States

This report shows that the proposed pipeline brings Gulf dangers to heartland states.