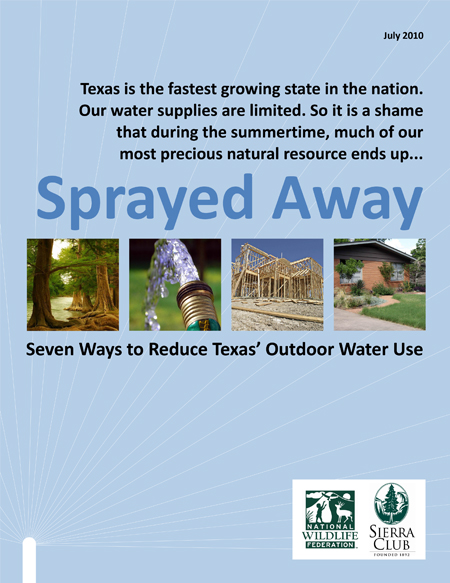 The National Wildlife Federation and the Lone Star Chapter of the Sierra Club released a joint report looking at outdoor water use in 18 Texas cities. The report found that water use in these cities increases an average of 58% during the summer months of July, August and September when compared to winter use.

The report calculates that if these 18 cities achieved just a twenty-five percent reduction in outdoor water use, they could save, collectively, an average of 147 million gallons every day during the summer. The Texas Water Development Board has estimated that about half of the water we use on our landscapes is wasted due to overwatering or runoff. The cities included in the report are: Arlington, Austin, Beaumont, Brownsville, College Station, Corpus Christi, Dallas, El Paso, Fort Worth, Garland, Houston, Katy, Laredo, Lubbock, Pflugerville, Plano, San Antonio, and Tyler.

Rethinking the Lawn: Over the past five years, permits for close to 600,000 new single family homes have been issued in Texas. Decisions made today about the types of lawns and landscapes to install in new developments have the potential to influence water use for decades to come. Smaller areas of turfgrass and the use of drought-resistant grasses can make a big contribution to reducing water use. Unfortunately, with only a few notable exceptions, Texas cities are currently doing little to guide new developments in this way.

Landscaping Rebates: Cities across the country have created programs paying customers to replace their turfgrass with more water-efficient landscaping. These programs are becoming more common in Texas, with entities such as the City of Pflugerville, San Antonio Water System and BexarMet Water District offering rebate programs. To ensure that customers learn new watering habits, the report recommends that utilities should make payment of rebates contingent on customers actually reducing their water use.

Rainwater Harvesting: Capturing rainwater has real potential as a source of water for Texas. A report published by the Texas Water Development Board estimated that a metropolitan area the size of Dallas could capture roughly 2 billion gallons of water annually if just 10 percent of the roof area was used to harvest rainwater. Although several Texas cities currently offer rebates on rain barrels, this source of water is currently seriously underutilized.

Rate Structures: A strongly tiered rate structure is the most equitable way to price water. Most residential customers use limited amounts of water, placing smaller demands on the system, and should pay less per unit of water as a result. For example, the San Antonio Water System has found that about 80% of their residential customers do not see any significant rise in their bills during the summertime. This indicates that the 30% bump in total water use that San Antonio sees during the summertime is primarily caused by a small portion of the utility’s customers. However, heavy users in most cities usually pay little more—and often less—per thousand gallons than frugal water users.

This report looks at outdoor water use in Texas and recommends seven ways to water wisely.