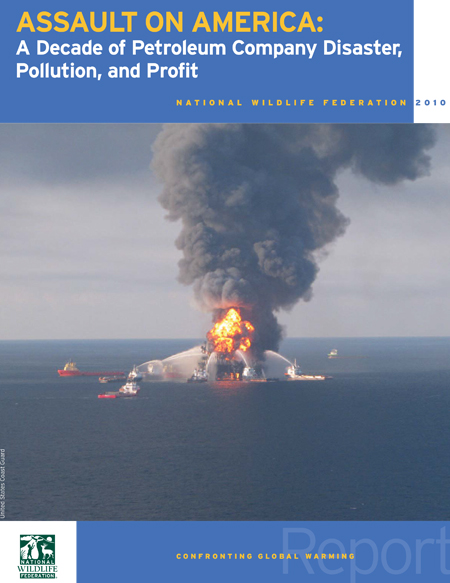 The Gulf oil disaster in the Gulf of Mexico, with its tragic loss of life and devastating impact on the Gulf Coast economy, has brought the risk and high cost of oil development to the public’s attention. Predictably a round of oil industry executives have testified before Congress offering countless apologies and empty assurances that such an incident will never happen again. But this is the fourth major oil spill in 33 years on North America.

Major oil spills are really only a small part of the real story. From 2000 to 2010, the oil and gas industry accounted for hundreds of deaths, explosions, fires, seeps, and spills as well as habitat and wildlife destruction in the United States. These disasters demonstrate a pattern of feeding the addiction to oil leaving in their wake sacrifice zones that affect communities, local economies, and our landscapes.

The BP Deepwater Horizon event is the largest and potentially most devastating environmental disaster the oil and gas industry has yet to foist on Americans. However, the frequency and recurrence of these events bears closer scrutiny. Incidents occur on a monthly and, sometimes, daily basis across the country but sadly only a portion of these make the front page or evening news.

This report provides a sampling of the oil and gas industry’s performance over the past 10 years--the first decade of the new millennium. These ‘lowlights’ and examples from each year shed light on how the oil and gas industry has continued to show negligence and experience accidents all over the country. While not exhaustive, the listing offers a cross-section of spills, leaks, fires, explosions, toxic emissions, water pollution, and more that have not occurred in the last decade--the post- Exxon Valdez era, the post- Oil Pollution Act of 1990 era, when the industry said “we’ve got it under control.”

This was supposed to be the era of “never again,” the refrain often heard following a major tanker spill, refinery explosion, or pipeline leak. We were told that spill prevention plans, better safety procedures, and improved technology, would help eliminate spills, fires, explosions, leaks and seeps. Yes, this was supposed to be the era of no more leaky river barges, no more oil refinery smog, no more worker deaths and injuries, no more well blow-outs, and no more underground tank farm plumes or gas station oil seepage into groundwater or beneath neighboring communities. Yet we have had all of that and more in the last decade.

The stories that follow show that today’s oil and gas industry threatens Americans in countless ways. This industry continues to knowingly endanger its own workers, the environment, wildlife, and our communities in states across the nation.

The total cost of the status quo--in lives lost and health risks as well as social and environmental degradation--is far too high. The sooner we move in the direction of meeting our energy needs through cleaner, safer sources.

And now is the time to cap global warming pollution from all oil and gas production--including every aspect of the uncontrolled extraction and refining processes where methane, carbon dioxide, and other global warming gases are released into the air every day.

The BP Deepwater Horizon spill is truly a tragedy of our time. It should be used to take a closer and more comprehensive look at the full and continuing costs that the oil and gas industry continues to impose on society with its pollution, environmental degradation, habitat destruction, wildlife loss, worker and community endangerment, health effects consequences, and loss of life.

Assault on America: A Decade of Petroleum Company Disaster, Pollution, and Profit