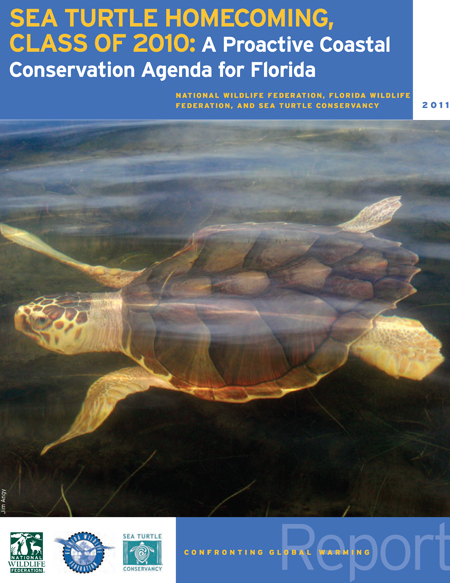 For the people who live near the Gulf of Mexico — and, indeed, for Americans everywhere — the catastrophic Deepwater Horizon oil spill during the summer of 2010 will be an event forever etched in our memories. It was a time of great uncertainty and fear about the plight of the region’s coastal wetlands, beaches, and ocean waters and the many benefits that they provide for us all. But it also was a time in which our conservation ethic truly bloomed. One of the most compelling symbols of our love and concern for the species that share our coastal and marine systems was the unprecedented effort to relocate the nests of threatened and endangered sea turtles along the Gulf Coast to oil-free habitats on Florida’s Atlantic Coast.

For sea turtles in the Gulf of Mexico, the Deepwater Horizon oil disaster could not have come at a worse time. During the peak summer months, beaches throughout the Gulf Coast host thousands of sea turtle nests with tens of thousands of eggs. Once hatched, the young sea turtles instinctively make their way into the sea, where they will live for several decades before returning to their natal beaches to nest, beginning the cycle anew. But with oil gushing into the Gulf and washing up on the region’s wetlands and beaches, concern about the season’s sea turtle offspring grew deep, galvanizing scientists, conservationists, and concerned citizens to coordinate a concerted strategy to excavate nests, transport and nurture the eggs, and then release tens of thousands of newly-hatched turtles into the Atlantic Ocean.

The joy of watching these hours-old sea turtles unwaveringly scurry into the dark ocean waters was well-earned confirmation that, when we put our minds to it, we can make a difference in the conservation of our natural world. But we cannot rest on our laurels. As news of the oil spill and its impacts has faded from the headlines and the thousands of volunteers who helped in the recovery effort have returned to their regular lives, many challenges remain, both on our coasts and in our oceans. Certainly, one must wonder: after hopefully surviving an onslaught of challenges at sea, what will the homecoming be like for these sea turtles 30 years from now as they return to Florida’s shores? Will they find plentiful, healthy beaches free of artificial light, pollution, roads, and seawalls? Or will business-as-usual coastal development, coupled with the rapidly growing threats from climate change and sea-level rise, make our conservation successes today for naught?

The answers lie in whether we decide now to make the difficult but necessary choices to improve how we manage our coasts, our oceans, and our planet’s climate. In this report, the National Wildlife Federation (NWF), Florida Wildlife Federation (FWF), and Sea Turtle Conservancy (STC) lay out a 4-part agenda that will require a strong and determined effort over the next few years to put coastal management in Florida on the right path. The decisions we make today on the following key actions will make the difference. Specifically, we can and must:

Ultimately, these actions will not only help ensure that the future for sea turtles and the many other species that depend on our coastal and marine habitats will thrive for generations to come, but they will foster safer communities, a flourishing economy, and a lasting recognition that our conservation actions truly can make a difference.