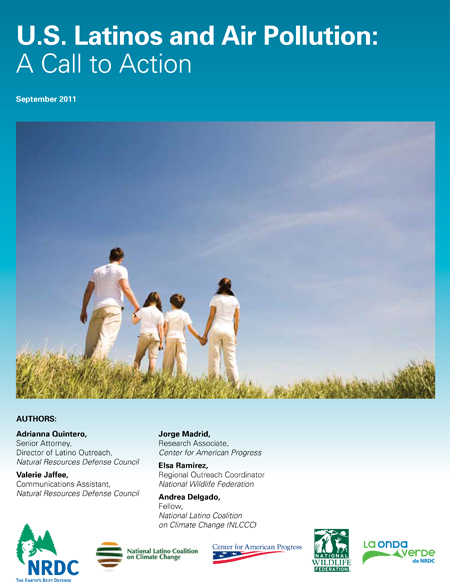 Air pollutants surround us wherever we are. On a daily basis, we are exposed to carbon, lead, nitrogen oxides, ozone, soot, and hundreds of other air pollutants emitted from our cars, factories, power plants, and heavy machinery. At certain levels, many of these pollutants become highly harmful to human health, especially for those living in areas with high concentrations of air pollution. Latinos are especially vulnerable because they live in regions with the worst air contamination.

The Hispanic population in the United States is increasing rapidly, surging by 43 percent from 2000 to 2010, dramatically outpacing the nation’s growth rate during the same period. Hispanics became the largest minority group in 191 metropolitan districts last year, with the highest expansion in areas of concentrated vehicle traffic, industry, and power plant activity. Nearly one out of every two Latinos lives in the country’s top 25 most ozone-polluted cities.

Air pollution puts human health at risk in numerous ways. Fragile lung tissue can be easily damaged by pollutants released by cars, buses, heavy machinery, factories, and power plants. These pollutants can lead to an increased risk of various respiratory diseases, including asthma, lung cancer, and chronic bronchitis, as well as contributing to premature death. Air pollution can be especially dangerous for people vulnerable to health problems, such as pregnant women and young children. Growing evidence shows that air pollution exposures in pregnancy and early childhood put children at higher risk of adverse health outcomes.

Although air pollution is most commonly associated with respiratory illnesses, pollutants can travel long distances in the atmosphere, settle onto vegetation, contaminate bodies of water, and enter the food chain, putting our health at risk through various exposure pathways.

Protecting Our Lungs through Limits on Smog

The Environmental Protection Agency (EPA) regulates air pollution under the Clean Air Act, which requires the agency to set National Ambient Air Quality Standards (NAAQS) for the six most commonly found air pollutants (criteria pollutants) and to update these standards when science shows that they are not protective enough of human health. The six criteria pollutants include particle pollution (particulate matter), ground-level ozone (smog), carbon monoxide, sulfur oxides, nitrogen oxides, and lead. Other pollutants regulated by the EPA under separate statutory programs, such as mercury and air toxics, can also cause significant damage to human health.

The EPA reports that as of 2008, 127 million people—42 percent of the population—lived in areas that do not meet one or more NAAQS. Most of these Americans live in areas that the EPA has deemed to have unhealthy ozone levels. Ozone is a colorless gas found in our air that, at ground level, is the primary component of smog and is the most threatening pollutant to human health. When ground-level ozone is found at high levels, it can diminish lung function, inflame airways, and aggravate asthma and other respiratory illnesses.

Latinos are highly exposed to ground-level ozone and its harmful effects. According to the Centers for Disease Control and Prevention (CDC), close to 50 percent of all Hispanic- Americans live in counties that frequently violate groundlevel ozone standards. Asian-Americans share this high risk. Because the 2008 smog standard used by the EPA for its estimate is outdated and non-protective of human health, one can reasonably conclude that even more Americans currently live in areas with ozone levels that the EPA and the latest science identifies as unhealthy.

In 2008, the EPA updated national air quality standards for ozone by limiting its concentration in the air to 75 parts per billion. In doing so, the agency’s administrator at the time, Stephen Johnson, ignored the unanimous recommendations of the agency’s science advisers, who had urged that a more protective ozone standard be set within a range of 60 to 70 parts per billion. In order to properly protect particularly vulnerable populations, experts believe that the standard should be set at the lower end of that range.

The EPA estimates that a truly protective ozone standard set at 60 parts per billion would prevent, annually, as many as 12,000 premature deaths, 58,000 asthma attacks, 21,000 hospital and emergency room visits, 5,300 heart attacks, and more than 2 million missed school days and 420,000 lost work days.

Despite repeated calls to strengthen the standard as required under the Clean Air Act, on September 2, 2011, the Obama Administration chose to delay a revision of the nonprotective standard, capitulating to calls by industry that a health protective standard would pose an undue regulatory burden, leaving millions of Americans facing an unnecessary and undue risk.

Leaving the current standard in place—the policy of choice of large, polluting industries—means more lives lost and more asthma attacks, suffering that Latinos will greatly bear. The EPA has proposed to update and strengthen this ozone standard to follow the latest science.

Brain Toxins in Our Air

In March 2011, for the first time, the EPA proposed standards to limit mercury, arsenic, and other air toxics from power plants. Mercury is a highly dangerous neurotoxin that can damage the brain, heart, kidneys, lungs, and immune system of people of all ages. This metal, which is released into the air by coal-fired power plants, is especially hazardous for young and developing children. Every year, coal-fired power plants emit 772 million pounds of toxic chemicals into the air we breathe—more than 2.5 pounds for every man, woman, and child in this country.

With these health consequences in mind, adoption of a protective air toxics rule will prevent approximately 17,000 premature deaths, 120,000 asthma attacks, and 12,000 hospitalizations and emergency room visits every year. As in the case of ozone, this rule would be especially beneficial for the Latino community, because 39 percent of Latinos live within 30 miles of a power plant. The CDC reports that Latino children have higher levels of mercury in their bodies compared with non-Hispanic white children. Truly protective standards for mercury and other air toxics would allow Latino children across the country to have a brighter, healthier future.

The EPA also projects that the proposed mercury and air toxics standards will create up to 31,000 short-term construction jobs and 9,000 long-term utility jobs, as workers are hired to bring power plants into compliance. Considering that, on average, Hispanic workers occupy two out of every three new construction jobs in the United States, these standards could bring relief to thousands of Latino families suffering under the economic downturn.

Latino communities strongly support stricter air quality standards as they understand the importance of clean air to community health and a better standard of living. In a 2008, a Sierra Club poll of 1,000 Latino voters nationwide, 51 percent stated that air and water pollution was the most important environmental problem they faced. Sixty-six percent stated that they didn’t know how close their home or workplace was to a toxic site such as a freeway, factory, chemical plant, or refinery—sources of harmful pollution that put the health of their families at risk.

Although some conservative politicians and polluting industries have tried to portray proposals to curb air pollution as job killers, a majority of Latinos believe that switching to clean energy is consistent with a good economy, according to a 2010 poll by the National Latino Coalition on Climate Change. A strong majority in Nevada (72 percent), Florida (66 percent), and Colorado (64 percent) believed that reducing pollution from energy generation would create new U.S. jobs rather than eliminate them.

This concern has begun to translate into significant government action that promotes environmental progress, economic prosperity, and healthy communities. In the November 2010 election in California, broad Latino support was crucial in defeating the anti-clean air ballot measure (Proposition 23), which would have dismantled California’s landmark global warming law and clean air protections. In recent months, groups representing more than 5 million Latinos have repeatedly called on Congress and President Obama to protect the Clean Air Act and our health from the influence of large, polluting industries.

Protecting our children and communities from smog and air toxics must be taken seriously. With the health of so many at risk, we can no longer ignore the science. The EPA must strengthen the smog standard and set mercury and air toxics standards to the levels recommended by the agency’s science advisors. This is a historic opportunity for our leaders in Washington to safeguard millions of Americans from harmful respiratory diseases and other illnesses, regardless of race.

U.S. Latinos and Air Pollution: A Call To Action

A call to action for Latino communities in the United States to push for greater environmental protections.