A Degraded Gulf of Mexico 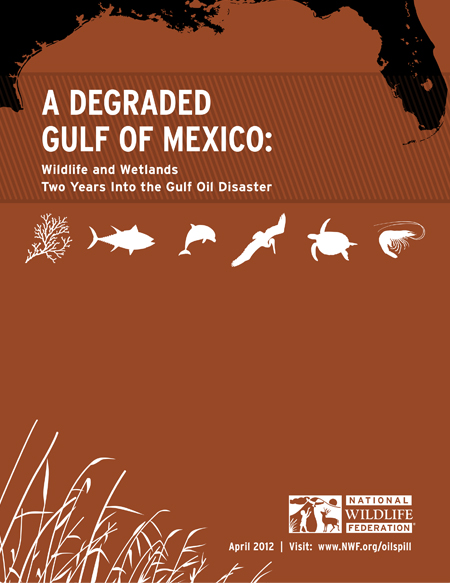 This report gives a snapshot view of the current status of coastal wetlands and six wildlife species (or groups of species) that depend on a healthy Gulf. The Deepwater Horizon explosion killed eleven people, with the ensuing spill releasing more than 200 million gallons of oil and very large quantities of hydrocarbon gas. Only a small proportion of affected wildlife are ever recovered after oil disasters, yet thousands of birds, hundreds of endangered sea turtles and hundreds of dolphins have been found dead in the disaster zone. That was only the beginning of the impacts of the oil spill on the Gulf. The growing evidence reveals that this oil spill is far from over.

Pursuant to the Oil Spill Pollution Act, the federal government is conducting a Natural Resources Damage Assessment (NRDA) to determine impacts of the Gulf oil spill. Only when the results of these confidential studies are finally released, will the public finally gain a better picture of the full impacts of the Gulf oil disaster. But already, the scant NRDA evidence that has been released and other scientific sources, hint at the toll the oil spill is taking on the Gulf of Mexico.

Dolphins: Indicators of Trouble in the Gulf

Since the spill commenced in 2010 through March 25, 2012, some 523 dolphins have  been found stranded in the oil spill area. Only 5 percent of stranded dolphins were recovered alive, and their prognosis was usually poor. This is more than four times the historical average of stranded dolphins over the same period of time.

In 2010, the year of the Gulf oil disaster, dolphin strandings in Louisiana were seven times larger than the long-term average. The year after the spill, Louisiana strandings reached even higher levels: 179 dolphins were found stranded in 2011, nearly eight times the historical average. In coastal areas of Alabama and Mississippi, also heavily oiled, dolphin strandings in 2011 were four times and five times the long-term average, respectively.

There have now been a record-shattering 26 consecutive months of above-average dolphin strandings (24 of those months during the spill or after the well was capped). By comparison, in the last decade the second most consecutive number of months with above average dolphin strandings was 10. The current unusual mortality event (UME) is 2.6 times longer with four times as many stranded dolphins and still isn’t
over. NOAA observed that “this magnitude of strandings in the northern Gulf is unprecedented.”

Not surprisingly in light of the continuing UME, many of the dolphins studied in Barataria Bay, which experienced heavy and prolonged oil exposure, are in poor health. Symptoms include anemia, low blood sugar and abnormally low levels of hormones that regulate metabolism and the immune system. Some are underweight and show symptoms of liver and lung disease. Dolphins can inhale oil vapors, ingest oil when feeding, absorb it through their skin or eat contaminated fish.

As a top level predator, the poor health of dolphins in the most heavily oiled areas suggests possible ecosystem-wide effects of the oil that are now being borne out by other studies. Polycyclic aromatic hydrocarbon (PAH) components of oil from the Macondo well were found in plankton even after the well was capped.

PAHs can have carcinogenic, physiological and genetic effects. Killifish residing in coastal marshes showed evidence of physiological impairment even to low levels of oil exposure(xi) and corals hundreds of years old on the Gulf floor were killed by oil from the Macondo well.(xii) Given the huge quantity of oil spilled, its widespread distribution, the fact that even small amounts of oil can have significant biological effects and that effects may be slow to develop after exposure to oil, our understanding of the full scope of the Gulf oil spill’s effects will likely be unfolding for decades.

Other oil spill disasters have taken years to reveal their full effects(xiii) and often recovery is still not complete after decades. Now, 23 years after the Exxon Valdez spill in Prince William Sound, clams, mussels, sea otters and killer whales are still considered “recovering,” and the Pacific herring population, commercially harvested before the spill, is showing few signs of recovery. Impacts of the Gulf oil disaster will likewise be unfolding for years, if not decades, and take even longer to understand. What is clear is that the disaster response focused on removing oil, with little action taken to address the long-term wetlands habitat degradation exacerbated by the oil disaster.

In order to restore the Gulf for all of its many cultural, recreational, commercial, environmental and aesthetic benefits, the most important actions needed are:

The future of Gulf Coast wetlands, wildlife and the way of life of local communities are depending on Gulf Coast restoration to provide a brighter future.

A Degraded Gulf of Mexico

Wildlife and wetlands two years into the Gulf oil disaster.