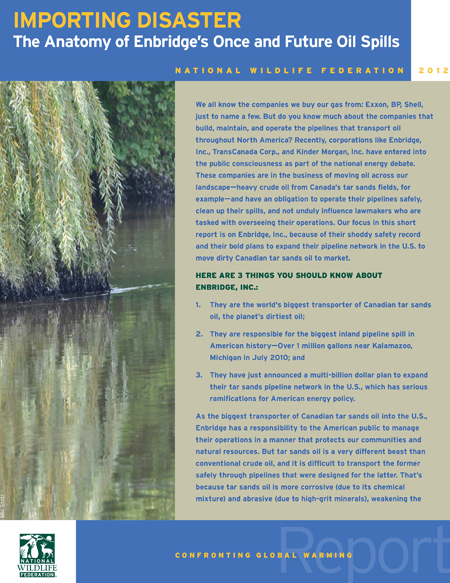 We all know the companies we buy our gas from: Exxon, BP, Shell, just to name a few. But do you know much about the companies that build, maintain, and operate the pipelines that transport oil throughout North America? Recently, corporations like Enbridge, Inc., TransCanada Corp., and Kinder Morgan, Inc. have entered into the public consciousness as part of the national energy debate. These companies are in the business of moving oil across our landscape—–heavy crude oil from Canada’s tar sands fields, for example—–and have an obligation to operate their pipelines safely, clean up their spills, and not unduly influence lawmakers who are tasked with overseeing their operations. Our focus in this short report is on Enbridge, Inc., because of their shoddy safety record and their bold plans to expand their pipeline network in the U.S. to move dirty Canadian tar sands oil to market.

HERE ARE 3 THINGS YOU SHOULD KNOW ABOUT ENBRIDGE, INC.:

As the biggest transporter of Canadian tar sands oil into the U.S., Enbridge has a responsibility to the American public to manage their operations in a manner that protects our communities and natural resources. But tar sands oil is a very different beast than conventional crude oil, and it is difficult to transport the former safely through pipelines that were designed for the latter. That’s because tar sands oil is more corrosive (due to its chemical mixture) and abrasive (due to high-grit minerals), weakening the pipes to the point that they are more susceptible to leaks and ruptures. Remarkably, there are no standards in place to ensure that new pipelines are built, maintained and operated with this fact in mind. As if these problems are not enough, when it spills, tar sands oil is much harder to clean up than conventional crude oil, most notably because it sinks in water, rather than floats, putting our streams and rivers at risk.

Unfortunately, dirty energy companies have such a stranglehold on our politicians that even modest initiatives, like basic safety regulations for tar sands oil, rarely see the light of day in Washington. Until we break Big Oil’s grip on our policymakers, meaningful and needed reforms to protect our water, protect our communities, and improve our energy future stand little chance of being enacted. A company with Enbridge's safety record cannot be allowed to expand without strict oversight and scrutiny. Otherwise, the risk of another serious spill is too great.

Are we going to let Enbridge expand their pipeline network in the U.S. and maximize profits, without implementing strong safety standards and practices? We know tar sands pipelines are going to spill. The only remaining questions are—–When? How much? Where? Will it get cleaned up? And who will pay for it?

The anatomy of Enbridge’s once and future oil spills.