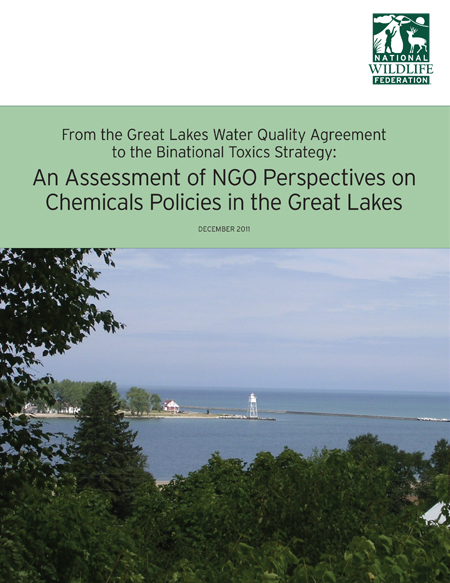 Toxic chemicals, first recognized as a problem in the Great Lakes four decades ago, continue to threaten human health and the broader ecosystem in the Great Lakes region. To address these threats, programs at local, state/provincial, national and binational levels have been adopted in the U.S. and Canada. Much of the work addressing chemicals policy has occurred under the Great Lakes Water Quality Agreement (GLWQA), first signed in 1972 and revised twice since then, and incorporating aggressive goals for toxic chemicals. One means of coordinating efforts towards these goals has been the Canada–U.S. Binational Toxics Strategy (BTS), signed in 1997. An important component in the development of chemicals policies in the region has been public involvement, including through the work of environmental nongovernmental organizations (ENGOs). Many organizations were active in earlier chemicals policy work, including International Joint Commission meetings, negotiations around the 1987 GLWQA revisions, and involvement in the BTS in its first several years.

More recently, there has been increasing attention to broader Great Lakes threats, as reflected in both research and policy/program developments (such as the Great Lakes Regional Collaboration Strategy and the Great Lakes Restoration Initiative on the U.S. side). Given these developments and other factors (such as the economic downturn and organizational changes), it has not been clear to what extent ENGO attention to chemicals policy activities has changed, and whether capacity and interest in individual organizations remain sufficient to engage in these broad chemicals policy discussions and activities.

In order to assess ENGO capacity, trends, and activities on chemicals policy issues, an online survey was developed and administered to groups in the region, with a focus on groups likely to have had some previous chemicals policy involvement. The principal objectives were to assess the extent and type of chemicals policy work currently undertaken by ENGOs, any changes in the past decade, involvement in and assessment of the BTS (and recommendations for a BTS-type strategy going forward), and assessment of characteristics believed to be important in a revised GLWQA. The survey was made available to 180 groups in Canada and the U.S., ranging from smaller watershed groups to national organizations, and over 40% of the groups (73) responded. Among the findings:

In synthesizing results from this assessment, some overarching recommendations concerning advancing Great Lakes chemicals policy include the following:

An assessment of NGO perspectives on chemicals policies in the Great Lakes.