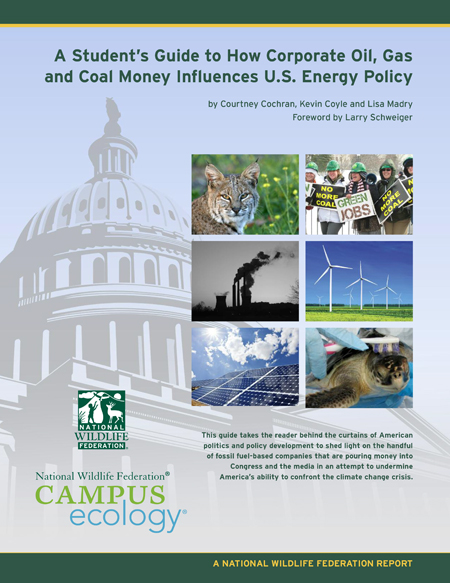 This is a guide to help students and young leaders better understand how oil, gas, and coal companies influence U.S. energy policy and public decision-making. This is not just information, it is a call to action, because, once you look behind the political-contributions curtain, you will see that, while they may have huge sums of money, it is really just a handful of companies paying to influence our energy future. Those of us who want to see a clean energy future outnumber them by a significant margin, and they can only succeed if we sit back and let them.

Citizens who care about a future with clean air, water, and healthy and sustainable communities, have to face the reality that there is something fundamentally wrong with the leverage money has in today’s politics. Financial contributions made to elected officials give the oil, gas, and coal companies a supersized say in how our world is shaped.

The global climate crisis is the greatest challenge facing our generation and our planet, and our national leaders treat it as nothing more than a political football to be tossed around to score points in the latest polls. One of the defining tragedies of the climate crisis is that it is a struggle of our own making. When we began burning carbon-polluting fuels at the dawn of the industrial age, we unleashed unprecedented amounts of industrial carbon pollution, the primary cause of climate change.

Global climate change will create a host of new consequential weather events and environmental impacts. A temperature increase of even a few degrees will cause a variety of new problems for Americans, including protracted summer heat waves and drought, more intense hurricanes and floods, sea level rise, crop failures, water shortages, and massive wildfires. Tropical diseases, such as West Nile Virus, are more likely to spread across the U.S. In addition, crucial ecosystems supporting fish and other wildlife will come under unprecedented stress and fall out of balance.

If there is a silver lining to this crisis, it is that, we have the power to alleviate it. As the second largest producer of industrial carbon pollution, the U.S. can make a globally significant contribution to the solution. Furthermore, The National Renewable Energy Lab released a report in 2012 showing that we can meet 80 percent of the total U.S. electricity generation by 2050 with clean renewable energy, using technologies that are commercially available today!

So why isn’t the U.S stepping up and leading the charge for new technologies and approaches to solving this problem? The reasons are many, but chief among them is the disproportionate influence of corporations with a vested interest in supporting traditional energy sources. These corporations stand to lose a great deal should we shift toward cleaner, renewable fuels. Oil, gas, and coal industries have been among the most profitable businesses globally for several decades. In fact, 10 of the top 20 most profitable companies in the world are oil, gas and mineral extractions companies.

So how exactly are their record profits spent? Of course, company shareholders receive a large chunk of money, but the grim reality is that a lot of these “big bucks” are used to influence the political process out of the view of the general public. Fossil fuel energy companies use this money to get sympathetic legislators into office without the average person knowing how big their influence truly is.

This is a guide to help students and young leaders better understand how oil, gas, and coal companies influence U.S. energy policy and public decision-making.