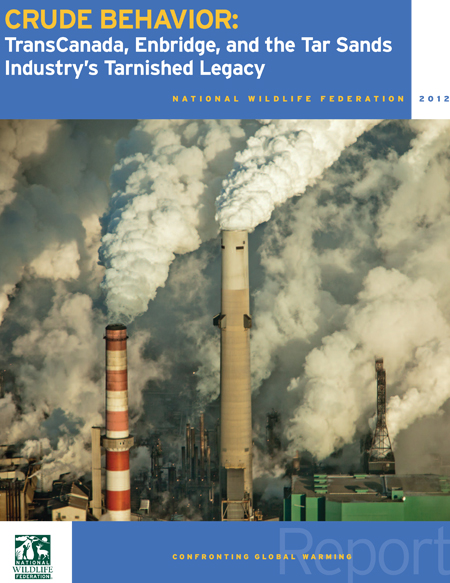 Up north of the border, past Calgary and Edmonton, Alberta, the planet’s biggest carbon bomb is ticking. It’s called the tar sands region, and it represents both incredible feats of industry and incredible hubris —– and potentially the last blow to the fight against global climate change.

Tar sands are sludge. A sticky, viscous, tarry material that literally oozes from the ground in certain areas of northern Canada and other places like Russia, Venezuela, and even right here in the US. Technically called “bitumen,” tar sands can be processed into gasoline and other petroleum products, though it takes more effort and causes a lot more pollution than conventional oil, the liquid we’re used to seeing drilled up by rigs in Texas or Saudi Arabia. The cornerstone of the argument against tar sands is that because it requires so much energy to turn from sludge into gasoline, it produces a significantly greater amount of the carbon dioxide which is turning our atmosphere into a heat-trapping blanket and fundamentally altering nearly every ecosystem on Earth. About 100 trillion gallons of tar sands have been discovered so far, enough to fill 160 million Olympic swimming pools. The vast majority is in Canada, which holds around three quarters of the world total.

Tar sands are, essentially, the fossil fuel industry’s answer to “Peak Oil,” the theory that once all of the easily accessed petroleum in the world has been pumped up, we will face declining reserves, rising prices, and a seemingly-inevitable transition to renewable fuels and an oilfree future. Now, new methods of extraction have sidelined that transition for the time being, allowing the industry to prolong its grip on energy production and driving us closer to the edge of irreversible climate change.

Until a few decades ago, experts wrote off tar sands as too expensive and too impractical to be a viable energy source. However, oil prices topping $100 a barrel have cast this resource in a new light, and an enormous mining and refining complex has sprung up in the area surrounding Fort McMurray, Alberta, a formerly sleepy town that now comprises the biggest industrial undertaking in history. The once rich wildlife habitat of the boreal forest is now scarred by thousands of acres of strip mines, vast open reservoirs filled with toxic chemicals, depleted rivers, and the constant rumble of machinery on an unprecedented scale. It has created a wasteland, and the frightening part is that developers are just getting started.

Readers of this report are probably already familiar with the “Keystone XL” pipeline, the poster child for the tar sands industry in the United States, which would carry almost 35 million gallons of diluted bitumen (tar sands crude) from Alberta every day. The proposed route for Keystone XL stretches nearly two thousand miles from Fort McMurray down through the Great Plains to ports on the Gulf coast of Texas, where refineries dot the map. Tar sands producers don’t currently have access to coastal ports in either Canada or the US, which prevents them from selling their product outside of North America. Keystone XL would give the oil industry its equivalent of the fabled Northwest Passage —– a way to access lucrative overseas market and boost their profit margins sky high. But Keystone XL isn’t the only project in the works —– A veritable spider web of tar sands pipelines is being proposed to stretch to ports in British Columbia, Maine, and even others in Texas, with more likely to follow.