Restoring a Degraded Gulf of Mexico 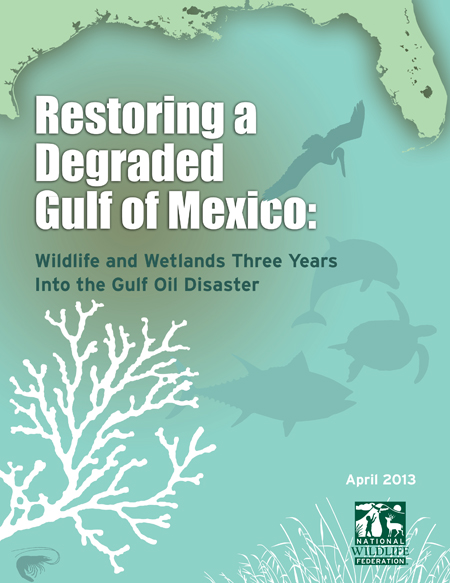 Three years after the Deepwater Horizon drilling rig exploded and dumped more than 200 million gallons of crude oil into the Gulf of Mexico, wildlife and wetlands are still recovering. How are they faring?

This report gives a snapshot view of six wildlife species that depend on a healthy Gulf and the coastal wetlands that are critical to the Gulf’s food web.

It describes different sources of restoration funding and provides initial suggestions as to how this funding can be used to improve the outlook for the species discussed in the report.

In August 2011, scientists did a comprehensive health examination of a 16-year-old male bottlenose dolphin.

This dolphin—dubbed Y12 for research purposes—was caught near Grand Isle, a Louisiana barrier island that was oiled during the Gulf oil disaster.

Like many of the 31 other dolphins examined in the study, Y12 was found to be severely ill—underweight, anemic and with signs of liver and lung disease. The dolphins’ symptoms were consistent with those seen in other mammals exposed to oil; researchers feared many of the dolphins studied were so ill they would not survive.

More than 650 dolphins have been found stranded in the oil spill area since the Gulf oil disaster began. This is more than four times the historical average.

The poor health of dolphins—an animal at the top of the Gulf’s food chain—suggests ecosystem-wide effects of the oil. The same may be true of sea turtles, which also continue to die in alarmingly high numbers.

Components of oil from the Macondo well were found in plankton even after the well was capped. Killifish residing in coastal marshes showed evidence of physiological impairment even at low levels of oil exposure, and corals hundreds of years old on the Gulf floor were killed by oil from the Gulf oil disaster. A recent study found that very low levels of exposure reduced hatch rates and survival in fish such as mahi mahi, and resulted in impaired cardiac development and swimming performance in the fish that did survive.

Furthermore, recent laboratory studies have found that the mixture of oil and the dispersant Corexit can prevent coral larvae from building new parts of a reef and was as much as 52 times more toxic than oil alone on rotifers, a microscopic grazing animal at the base of the Gulf’s food web.

Other oil spill disasters have taken years to reveal their full effects, and often recovery is still not complete decades later. Nearly a quarter-century after the Exxon Valdez spill in Prince William Sound, clams, mussels, sea otters and killer whales are still considered “recovering,” and the Pacific herring population, commercially harvested before the spill, is showing few signs of recovery.

Note: The rating system in this report looks at the overall picture of the status in the Gulf of Mexico, including the impact of the oil spill, the historical status, and what the future seems to hold based on current trends.

Restoring A Degraded Gulf of Mexico

Wildlife and wetlands three years into the Gulf oil disaster.