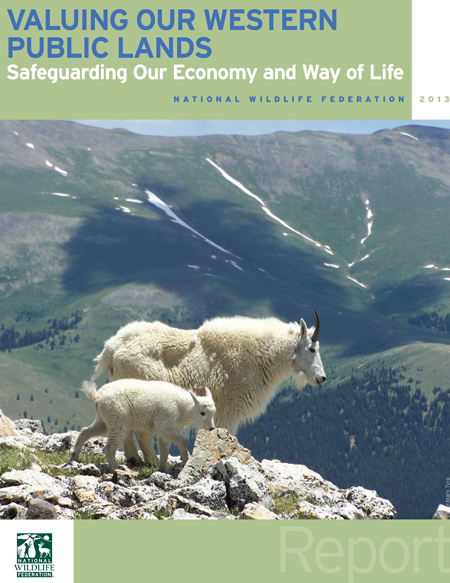 America's public lands – from national parks and forests to wilderness areas and wildlife refuges – are one of our nation's greatest treasures. These landscapes are a cherished part of our national heritage and character. They connect Americans with the outdoors and maintain the healthy ecosystems that support robust populations of fish and wildlife. They are the source of our clean air and pure water. These places are the wild inheritance we pass down to future generations.  Protecting these lands is key to safeguarding our economy and way of life.

In this report, the National Wildlife Federation explores the “value” of America’s public lands.  As a noun, “value” refers to monetary worth.  As a verb, “value” refers to the act of appreciating and treasuring something. This report compiles and summarizes data from a growing body of research on the value of public lands, which confirms that public lands are vital to the nation’s economic health and deeply valued by the American public.

Public lands support a booming tourism and outdoor industry. The outdoor recreation industry alone contributes nearly $650 billion to the U.S. economy and supports over 6 million jobs.  In addition, the natural amenities offered by federal lands attract new businesses and a skilled workforce, which creates jobs, income, and growth. Studies show that communities located near public lands – mostly concentrated in the West – experience relatively higher measures of economic growth. For instance, employment and personal income are growing twice as fast in the West compared to the rest of the country.

In addition, public opinion polls prove that people and businesses come to the West and choose to stay because of the quality of life tied to public lands. Westerners recognize the economic and intrinsic value of public lands and want to see them protected for future generations.

Elected officials are out of touch.

Even though our public lands provide many benefits to the U.S. economy and are highly valued by the American public, disputes over the use, management and ownership of these lands are a perpetual source of political tension in the West. These cherished places are threatened by those seeking to exploit them for private financial gain or trade them for political favor, and others who are opposed to the very concept of public land. Elected officials, unaware of or out of touch with broader public values and needs, seek to weaken protective laws and transfer public lands out of public ownership. These attacks insult the will of the people and defy economic realities. Fortunately, broad public support for preserving public lands has repeatedly overcome proposals that threaten public ownership and environmental protections.

Citizen advocacy is critical to preserving our public lands heritage. Public lands belong to all Americans and we each have a responsibility to protect them for future generations. While elected officials have the power to decide the fate of these lands, the American public has the power to influence those decisions with their voices and their votes. If you want to demonstrate your commitment to preserving our public lands, stay involved in decisions affecting these lands, and have your voice heard by elected officials, follow the recommendations at the end of this report.