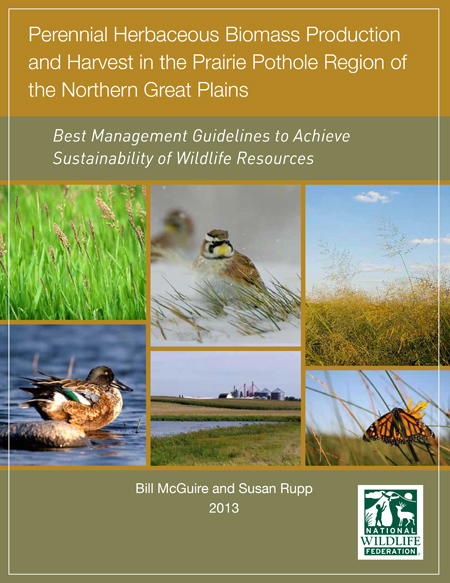 Though the use of biomass for heat and fuel production is not new in the United States, there has been a renewed interest in bioenergy production in response to increasing energy costs, dependence on foreign oil, greenhouse gas emissions and climate change. Recent legislation reflects the high level of interest. For example, the 2007 Energy Independence and Security Act (110 P.L. 140) raised the Renewable Fuel Standard (RFS-2) to require biofuels blending (with gasoline) of 36 billion gallons per year by 2022 of which 21 million are to come from non-corn sources with the focus on cellulosic materials. The northern Great Plains holds some of the greatest potential for the production of cellulosic biomass, but the region is also critical for wildlife producing 50-80% of waterfowl populations and providing breeding habitat for more than half of the bird species that breed in North America.

The Best Management Guidelines (BMGs) presented in this document were developed through a process that involved an advisory group of natural resource professionals with expertise in agronomy, production aspects of energy crops, wildlife (amphibians, birds, insects, mammals, reptiles), and native ecosystems. The following guiding principles helped define the uses and limitations of the BMGs:

Two feedstocks were selected – switchgrass and a 3-species mix of big bluestem, indiangrass, and sideoats grama. These feedstocks are currently the focus of collaborative efforts funded by the U.S. Department of Agriculture to create a Midwestern regional system for producing advanced transportation fuels derived from native perennial grasses. Guidelines were designed to focus on site selection, planting design, establishment, management, and harvest of these feedstocks on wildlife and their habitats (i.e., food, water, cover, and space). Effects on grassland songbirds, waterfowl, shorebirds, mammals, amphibians, reptiles, insects, and aquatic organisms are discussed.

Wildlife management is complex. The effects of bioenergy production on wildlife will depend on the combination of several factors that influence both the wildlife and the habitat. Wildlife sustainability necessitates considering (in the context of the differing needs of individual wildlife species) the feedstock selected, the surrounding habitat, the habitat that is replaced, the method of establishment, how intensively the stand will be managed, what inputs (herbicides, fertilizers, etc.) will be used, how much area the feedstock occupies, and how it is to be harvested as well as the timing of those operations. The advisory group of natural resource professionals worked together to consider, sort out implications, and identify approaches that integrate a basic level of consideration of wildlife needs.