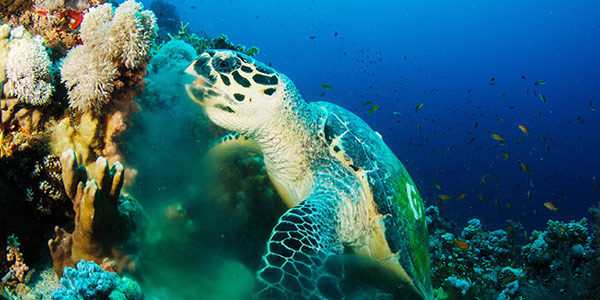 The hawksbill sea turtle is a small, agile turtle with an oval-shaped body. The reptile has powerful toothless jaws and a raptorlike "beak," which earned the hawksbill its name. This beak is perfectly suited for crushing, biting, and tearing food. The carapace has a tortoiseshell coloration, ranging from dark to golden brown with varying streaks of orange, red, and black. The shells of hatchlings are just one to two inches (2.5 to 5 centimeters) long and are usually heart-shaped and brown. The turtle’s bottom shell is yellow. The top shell’s rear edge is almost always serrated and has overlapping horny plates called scutes. The hawksbill has two pairs of prefrontal scales on its head and four pairs of scutes on the sides of its carapace. On average, adult hawksbills weigh between 100 and 150 pounds (45 and 68 kilograms) and their shells grow to an average length 2.5 feet (0.8 meters).

Hawksbill sea turtles are circumtropical, meaning they inhabit oceans, seas, and associated waters in tropical areas throughout the world. They are known to go as far south as the coast of Brazil. Sightings in U.S. waters are most common near Puerto Rico, the U.S. Virgin Islands, and off the coasts of Texas and southern Florida.

Hawksbills are the most tropical of the sea turtles and use different habitats at different stages of their life cycle, but are rarely seen in water more than 65 feet (21 meters) deep. They are most commonly found in coral reefs, rocky areas, lagoons, and shallow coastal areas. They are also found in mangrove-fringed bays and estuaries. Hawksbills are known to pick the same resting spot night after night.

Nesting occurs on undisturbed beaches, ranging from high energy beaches to very small pocket beaches, and a typical nesting site would be a sandy beach with woody vegetation near the water line. They lay their eggs under the sand or in vegetation.

Hawksbills are omnivorous, consuming seagrasses, sea urchins, barnacles, small animals, and—their favorite food—sponges. In the Caribbean, as hawksbills grow, they begin exclusively feeding on only a few types of sponges, and they can eat an average of 1,200 pounds (544 kilograms) of sponges a year. However, in the Indo-Pacific, hawksbills continue eating a varied diet that includes sponges, other invertebrates, and algae. Interestingly, some of the sponges and small animals that hawksbills consume are toxic. The hawksbill's body fat absorbs the toxins without making the turtle ill, but their meat is potentially poisonous to humans. This discourages, but does not stop, the harvesting of hawksbills for meat.

Like other sea turtles, hawksbill turtles are solitary for most of their lives; they meet only to mate. Every two to three years, females return to nest on the very same beaches where they themselves hatched, referred to as natal beaches. The nesting season in most locations occurs sometime between April and November. Hawksbills nest at night, laying three to six clutches a season at two week intervals. In Florida and the U.S. Caribbean, a clutch size is about 140 eggs.

In contrast to all other sea turtle species, hawksbills usually nest in low densities on scattered small beaches. The exceptions are the Gulf and Caribbean coasts of the Yucatán Peninsula, Mexico, where hawksbills nest on long expanses of beach in densities of 20 to 30 nests a kilometer. Several Yucatán beaches account for 25 to 30 percent of all hawksbill nesting in the Caribbean.

By the time they reach 14 inches (35 centimeters) in length, hawksbills tend to move onto reef habitat. They are believed to begin breeding about 25 to 35 years later. However, the time required to reach 14 inches is unknown and growth rates vary geographically. As a result, actual age at sexual maturity is not known. The normal lifespan of hawksbill turtles is thought to be about 30 to 50 years.

Hawksbill sea turtles are internationally listed as critically endangered, and the reptile has been federally listed as an endangered species since 1970. The hawksbill’s beautiful, translucent shell is unfortunately one of its greatest liabilities. The shell is used to make jewelry, hair decorations, and other ornaments, and even though international trade of the hawksbill is prohibited, it continues in much of the world. In addition hawksbills are harvested for their meat. Marine pollution and debris, watercraft strikes, and incidental take from commercial fishing operations also contribute to human-related deaths. As coral reef habitats continue to decline, the hawksbill’s primary source of food is reduced, putting the sea turtles at greater and greater risk. Their nesting habitat is threatened by degradation from coastal development and beach armoring. Beachfront lighting causes hatchlings to mistake the artificial light for their true destination—the moonlit sea. Any distraction from their dash to the water is an opportunity for predators to pick up an easy meal.

Hawksbill turtles are protected by various international treaties and agreements, as well as national laws. Bycatch of hawksbill turtles (accidental capture by commercial and sport fishermen) is being reduced by fishing gear modifications (such as the use of TEDs, or turtle exclusion devices), changes to fishing practices, and closures of certain areas to fishing during nesting and hatching seasons.

Hawksbill hatchlings can’t dive very deep, so they are often found floating in masses of sea plants and algal mats where they find shelter.

The Humane Society of the United States