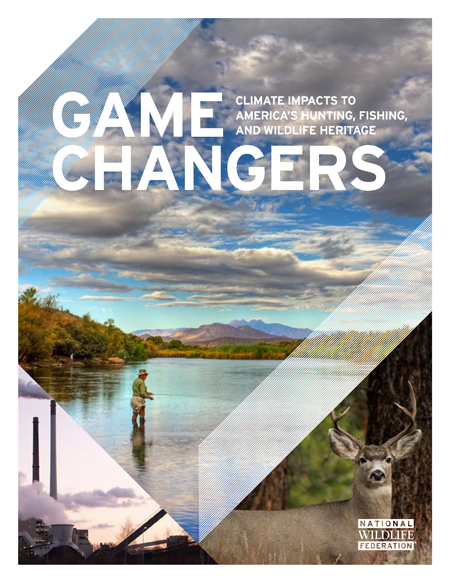 Hunters and anglers were some of America’s first supporters of conservation and wildlife management.

Today, they still play a huge role in conservation and in supporting local economies. Through various excise taxes and the purchase of hunting and fishing licenses and stamps, sportsmen and women provide an integral amount of funding to state conservation agencies. They also contribute some $90 billion to the national economy each year.

The pastimes of hunting and angling and the enjoyment they provide are threatened by climate change.

Many of the cherished species important to these sportsmen and women, including big and small game, birds, and fish, are facing increasingly dangerous situations brought on by warming waters, shorter winters, and longer droughts. Trekking into the outdoors is popular, whether to hunt, fish, or wildlife-watch, but as climate change progresses and wildlife populations migrate or disappear, these activities are becoming threatened. These changes may even pose an increased risk to outdoor adventurers, such as in the case of increased pests, like Lyme-disease carrying deer ticks.

Fortunately, with the help of hunters and anglers, the causes of climate change can be addressed. By supporting and implementing the Environmental Protection Agency’s Clean Power Plan to reduce carbon pollution from power plants, developing clean energy sources, and reducing fossil fuel use, we can help reduce the carbon and other climate pollutants going into the atmosphere and protect habitat for game and other wildlife from climate change impacts.

This report explores the impacts of sportsmen and women on modern conservation and the recreation economy. It also examines the challenges faced by outdoor recreationalists and the wildlife important to hunters and anglers in the face of a changing climate.

Climate Impacts to Our Hunting and Fishing Heritage

Across the United States and around the world, climate change poses an increasingly dire threat to wildlife, communities, and public health. Changes to our climate are projected to destroy critical wildlife habitat, cause habitat ranges to shift, increase incidence of pests and invasive species, decrease available food and water, change the chemistry of the ocean, and increase the rate of species’ extinction - several of these impacts are already occurring.

Many wildlife species are struggling to adapt and some never will. From game species as varied as ruffed grouse and mountain goats, to venerated fish such as salmon and walleye, America’s rich community of fish and game is at risk from a warming world.

The wildlife and wild places that Americans hold dear are under assault from climate change. America’s hunters and anglers are needed to speak up and take action! This nation’s core of conservationists, hunters, and anglers has a proud legacy of working to protect wildlife and that effort is still underway.

The science is clear: the longer we delay taking meaningful steps to reduce climate pollution, the more serious the harmful impacts to our outdoor traditions, including fishing and hunting.

Action is necessary now for the benefit of people, wildlife, and wildlife habitats. To preserve our ability to enjoy the outdoors and protect wildlife we must call on our leaders and our communities to: