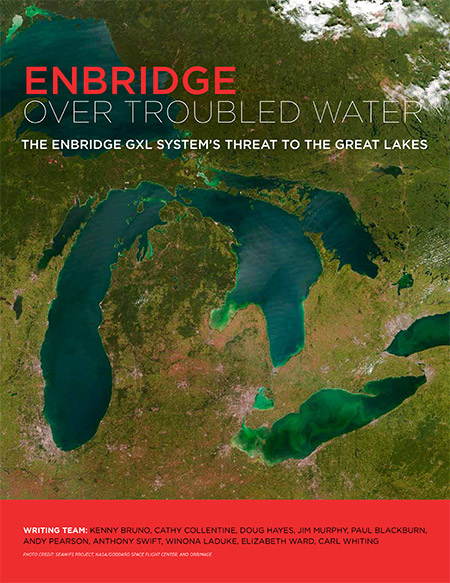 This report details the significant risks posed by Canadian pipeline giant Enbridge’s pipeline system to the Great Lakes region. As the report details, Enbridge owns and operates a labyrinth of pipelines that wend their way through the Great Lakes region. This system creates a massive risk to waters and communities in the pipelines’ paths. It also imperils the planet’s climate.

Many of Enbridge’s pipelines already carry syncrude from destructive tar sands mining and heavy toxic tar sands oil that would have been carried by the now rejected Keystone XL pipeline — both highly carbon polluting substances. Enbridge is currently carrying out plans to more than double the amount of nearly impossible to clean up tar sands oil flowing under and near the lakes, streams, wetlands and communities of the region.

Keystone XL was rejected due in large part to the fact that it would have enabled more tar sands oil production and more carbon pollution. Tar sands oil is about 20% more carbon polluting than regular oil on a well to wheel basis. With all major countries, including the U.S. and Canada, aspiring to a goal of allowing no more than 1.5 degrees C of warming, tar sands oil simply cannot be developed in any substantial amount. This is why rejecting Keystone XL was the only choice if we are to meet these climate saving goals.

Like TransCanada’s Keystone XL was properly rejected, the Enbridge GXL tar sands expansion must also be stopped. Enbridge GXL would increase tar sands oil transport into the Great Lakes region by about 1.1 million bpd — substantially more oil than was proposed for the rejected Keystone XL Pipeline. While Keystone XL was in the political spotlight, Enbridge was working behind closed doors with regulators to avoid the type of public environmental review that ultimately and appropriately led to the denial of the Keystone XL pipeline.

Enbridge is already bringing additional tar sands across the border. It plans to move it with new and existing pipelines throughout the Great Lakes to destinations as far as the Gulf Coast and East Coast. The extreme risks of tar sands to waters and communities have recently been confirmed by the National Academy of Sciences1 which found that tar sands transported as largely unrefined diluted bitumen is nearly impossible to clean up when it spills. And this heavy oil will inevitably spill, as it did in July of 2010 into the Kalamazoo River, a disaster that nearly reached Lake Michigan and pollutes stretches of the river to this day. In fact, since 2005, Enbridge has been responsible for 763 spills, totaling 93,852 barrels of both light and heavy crude, including tar sands crude, which have spilled and devastated local waterways.

This report details the following features of Enbridge’s GXL system: