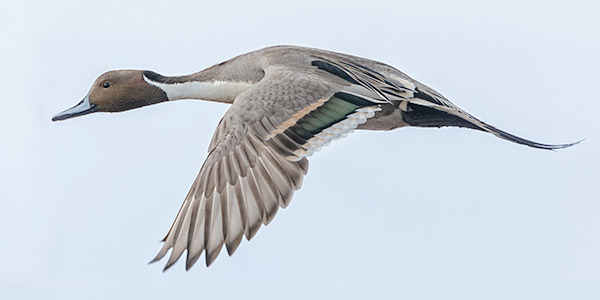 The pintail, also called the northern pintail, is a fast and graceful flyer that can be recognized by its long, thin neck and slim body. During the breeding season, the male ducks have a brown head, a black bill, and a white chest and neck. The white coloration extends as a thin line to the back of the neck. The male's sides and legs are gray, and it has distinctive long, black central tail feathers. Outside of the breeding season, the male pintail's plumage is duller and mostly brown. The female ducks maintain the same coloration year-round: a tan head with a whitish chin, a black bill, a tan breast, a white belly, and a mottled brown-and-tan back and rump.

The male makes a sound that's been described as a tooting two-toned whistle, and the female's sound has been identified as a nasal quacking. Both male and female pintails are medium-size ducks. The male's length is typically between 25 and 29 inches (64 to 74 centimeters) and the female's is between 21 and 23 inches (53 to 58 centimeters). They have a wingspan of about three feet (0.9 meters).

During the summer breeding season, the pintail ranges from Alaska through Canada and into the Great Plains. During the winter, it can be found from southern Alaska south to northern New Mexico, east to Missouri and the Ohio Valley, and along the Atlantic Coast from Massachusetts through the southern United States.

In general, pintails breed in prairie habitats—open country near lakes, rivers, and wetlands dominated by low vegetation and small, shallow water bodies, such as the prairie potholes of the midwestern United States. It often winters in inland and coastal wetlands and marshes, where it prefers open, shallow waters. Because they nest earlier than most ducks, they may suffer more from nest predation. Predators include crows, gulls, coyotes, foxes, skunks, raccoons, magpies and badgers. Coyotes and bobcats prey upon adult pintails.

The pintail is a dabbling duck, which means it feeds mainly on the surface in shallow waters, tipping itself headfirst to reach the leaves and seeds of aquatic plants. It feeds mostly in the evenings and at night. It also eats seeds, leaves, and roots of terrestrial plants, as well as grain from farm fields. They eat a small amount of insects, worms, snails, crayfish, minnows, and other small animals.

Pintails are one of the earliest nesting ducks in North America. They form pairs during the winter and spring migration. Pairs begin breeding early in the spring, sometimes before the ice has melted. Courtship involves vigorous gestures of the head and erratic paired flights. The male calls with a repeated whistle. The nest, made of grass and lined with down, is built in a hollow on dry ground, generally concealed by vegetation and not necessarily close to water. The female usually lays between 6 and 12 greenish-buff eggs. Incubation takes from 22 to 23 days, and the ducklings fledge within six to seven weeks. Pintails can live as long as 22 years in the wild.

Pintails are one of the most numerous species of ducks worldwide. In the United States they are common, but declining in numbers. Over the past 40 years, populations have dropped from more than 10 million to three million, which may be due to the loss of prairie habitat and predation. Where they nest in farm fields, pintail are also vulnerable to having their nests destroyed by farming operations.