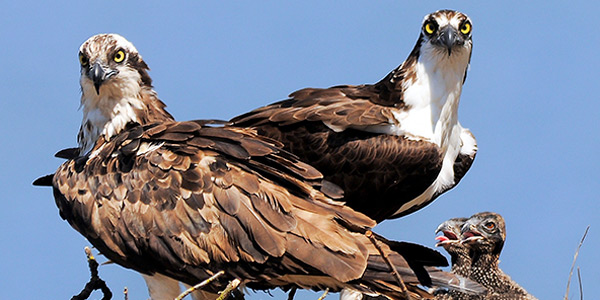 Also known as the fish hawk, ospreys are raptors that are well adapted for fishing. The birds have long legs and large feet with specialized barbs on the pads, hooked talons, and a reversible outer toe. This allows them to easily grasp fish with two toes pointing to the front and two pointing to the rear. Osprey have an oily waterproof coating on their wings and can close their nostrils when they plunge into the water. They also have slender bodies and long wings that are bent at the "wrist." Their strong wings give them extra lift to fly up and out of the water with a heavy fish. Once they catch a fish, they consume it using a black bill with a sharp hook.

Ospreys are brown on the back and white on the chest. The undersides of their wings are white with a dark patch at the wrists. Ospreys have yellow eyes and white heads with a distinctive black eye stripe that sets them apart from eagles, for which they are commonly mistaken. The female differs from the male in having a more defined "necklace" of brown feathers across her throat.

One of the larger birds of prey, but smaller than a bald eagle, ospreys have an average wingspan of five feet (1.5 meters). They are 21 to 23 inches (53 to 58 centimeters) long and usually weigh between three to four pounds (1.3 to 1.8 kilograms). The female is larger than the male.

The osprey is one of the few birds that can be found on every continent except Antarctica because they have few requirements beyond safe nesting sites and abundant fish. There are four subspecies of osprey. The subspecies that breeds in North America is Pandion haliaetus carolinensis.

Due to their diet, they nest near water, along rivers, lakes, wetlands, and coastal marshes. They frequently nest on telephone poles, pilings, channel markers, and other man-made structures in or near the water. Adults are sometimes preyed upon by bald eagles and great horned owls, while eggs and chicks are sometimes taken by snakes and raccoons.

Fish represent about 99 percent of their diet. Ospreys are very successful hunters, catching fish on at least one-quarter or more of their dives. They circle over shallow waters to locate fish below the surface. Once they locate a fish, they hover briefly and then dive into the water feet-first, sometimes becoming completely submerged.

Ospreys have several different calls, usually accompanied by a specific posture or aerial display, which they use for alarm, courtship, begging, and defending their nests.

Osprey have long migrations to breeding areas in the Pacific Northwest, Canada, and the north Atlantic coast of the United States. Their breeding months range from January through May. Osprey pairs are generally monogamous and often mate for life. The male selects a nesting site in a dead tree, on a cliff, or on a man-made structure in or near the water. The pair collects sticks and other nesting materials together, but the female generally arranges the nest, which is large and bulky. Pairs will often use the same nest in following years. The female lays between two to four eggs over several days, then the male and female both incubate the eggs. Chicks that hatch first generally do better than those that hatch later, as they compete for food. The chicks learn to fly after about two months. They remain in the nest for another two months, receiving food and protection from their parents and learning to fish. The oldest know osprey survived for 25 years, but the average lifespan in the wild is likely far less.

Osprey populations in North America declined dramatically from the 1950s to the 1970s due to chemical pollutants such as the pesticide DDT, which caused breeding failures from eggshell thinning. DDT was banned in the United States in 1972, and since that time ospreys have bounced back significantly, although some states still list them as endangered, threatened, or a species of special concern. Today their populations are increasing at a moderate pace and there are few current conservation concerns.

After an osprey catches a fish, it arranges its feet to turn the fish so it faces head-first. This reduces aerodynamic drag, making the fish easier to carry as the osprey flies off to its nest or another perch to eat the fish.