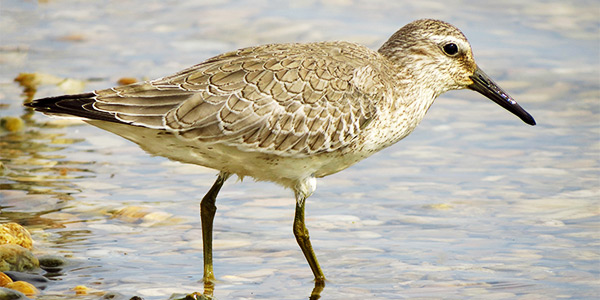 Though bulkier than other shorebirds, red knots migrate impressive distances. In the winter they resemble many of their shorebird relatives, possessing pale gray wings and rumps, and a white chest and face. But come springtime, they display their unique breeding plumage—dappled chestnut-brown wings and a distinguishable reddish breast and face. As adults, these birds reach a length of 10 to 11 inches (25 to 28 centimeters).

In the summer, red knots inhabit dry tundra areas, including hillsides with sparse vegetation. Their winter range places them on shorelines around the world, from Australia to South America. As they migrate, they are seen in sandy beaches, coastal mudflats, and even areas away from the coast but close to streams or ponds.

Red knots feast on horseshoe crab eggs, mollusks, insects, vegetation, and seeds. During their migration and in the winter, the bird feeds on small invertebrates that live in mud, such as small mollusks, marine worms, crustaceans. They forage on tidal flats by probing the mud with their bill and locating their food by touch. On breeding grounds, they feed mostly on insects, especially flies. To find food on dry sand and tundra, they forage by sight. Especially early in breeding season (when insects may be scarce), red knots eat shoots, buds, leaves, and seeds.

These birds winter in large concentrations and will migrate long distances for food. They make their nests by forming cup-shaped depressions in the ground, then line the depressions with dried leaves, grasses, and lichens. Red knots been documented living for up to 15 years.

Red knot numbers are currently in decline, and one subspecies native to the United States, Calidris canutus rufa, is federally listed as threatened under the Endangered Species Act. Climate change and coastal development have sharply reduced its population in recent decades, as has the overharvesting of horseshoe crabs, which are a food source for these birds.