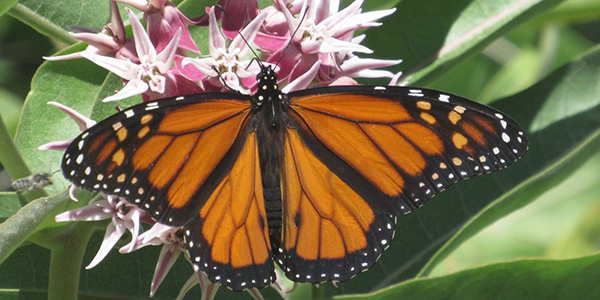 The large and brilliantly-colored monarch butterfly is among the most easily recognizable of the butterfly species that call North America home. They have two sets of wings and a wingspan of three to four inches (7 to 10 centimeters). Their wings are a deep orange with black borders and veins, and white spots along the edges. The underside of the wings is pale orange. Male monarchs have two black spots in the center of their hind wings, which females lack. These spots are scent glands that help males attract female mates. Females have thicker wing veins than males. The butterfly’s body is black with white markings.

Monarch caterpillars are striped with yellow, black, and white bands, and reach lengths of two inches (five centimeters) before metamorphosis. They have a set of antennae-like tentacles at each end of their body. The monarch chrysalis, where the caterpillar undergoes metamorphosis into the winged adult butterfly, is a beautiful seafoam green with tiny yellow spots along its edge.

Monarch butterflies are found across North America wherever suitable feeding, breeding, and overwintering habitat exists. They are broken into two populations separated by the Rocky Mountains, called the eastern and the western populations.

Whether monarchs are present in a given area within their range depends on the time of year. They are one of the few migratory insects, traveling great distances between summer breeding habitat and winter habitat where they spend several months inactive. In the summer they range as far north as southern Canada. In the fall the eastern population migrates to the cool, high mountains of central Mexico and the western population migrates to coastal California, where they spend the entire winter.

The population east of the Rocky Mountains contains the majority of the North American monarch population, which completes its northward migration through successive generations. They are found in the highest concentrations along a migratory flyway corridor through the central United States. In spring the monarchs leave overwintering grounds in Mexico and migrate north into Texas and the Southern Plains, then up through the Northern Plains and the Midwest, and finally up into the Great Lakes region. By late summer, eastern monarchs have spread north into Canada and eastward from the central migratory corridor throughout the Northeast and Southeast states.

From September into early October, fall southern migration to Mexico begins, with the majority of monarchs following the reverse path south along the central migratory corridor. Monarchs from the Northeast head south along the Atlantic coast, concentrating in the states that make up the Delmarva Peninsula between the Atlantic Ocean and the Chesapeake Bay on the journey. Florida is a stop for many monarchs before they fly over the Gulf Coast to Mexico. A much smaller population of monarch butterflies lives west of the Rocky Mountains. During summer, western monarchs live in canyons or riparian areas of the West, Southwest, inland California, and the inland Northwest states up to British Columbia. A small number of monarchs can be found in the coastal Pacific Northwest during summer months. Instead of making the long journey to Mexico, western monarchs only migrate as far south as coastal areas of central and southern California.

There are populations of monarchs in Hawaii, Puerto Rico, and some islands of the Caribbean, as well as in New Zealand. Monarchs may have been blown to these place in storms or naturally dispersed there by island-hopping, or they may have been introduced by humans. These populations are not part of the annual migrations on the North American mainland.

Monarchs, like all butterflies, have a different diet during their larval caterpillar phase than they do as winged adults. As caterpillars, monarchs feed exclusively on the leaves of milkweed, wildflowers in the genus Asclepias. North America has several dozen native milkweed species with which monarchs coevolved and upon which they rely to complete their life cycle.

Milkweed produces glycoside toxins to deter animals from eating them, but monarchs have evolved immunity to these toxins. As they feed, monarch caterpillars store up the toxins in their body, making them taste bad, which in turn deters their predators. The toxins remain in their system even after metamorphosis, protecting them as adult butterflies as well.

As adults, monarchs feed on nectar from a wide range of blooming native plants, including milkweed.

Monarchs lay their eggs on milkweed, their only caterpillar host plant. It takes three to five days for the egg to hatch. After hatching and consuming their empty egg case, monarch caterpillars feed exclusively on milkweed. The caterpillars grow and molt several times over roughly a two-week period and then form a chrysalis in which they undergo metamorphosis. After approximately another two weeks within the chrysalis, they emerge as adult butterflies.

Most adult monarchs only live for a few weeks, searching for food in the form of flower nectar, for mates, and for milkweed on which to lay their eggs. The last generation that hatches in late summer delays sexual maturity and undertakes a spectacular fall migration, one of the few insects to do so. This migratory generation can live upward of eight months.

The annual monarch life cycle and migration begins at the monarchs’ overwintering grounds in Mexico (for the eastern population) and the central to southern California coastal region (for the western population). Around March, the overwintering monarchs begin their journey north. Once migration begins, monarchs become sexually mature and mate. The females begin their search for milkweed plants on which to lay eggs. After mating and egg-laying, the adult butterflies die and the northward migration is continued by their offspring. It takes three to five generations to repopulate the rest of the United States and southern Canada until the final generation of the year hatches and does the return journey to the overwintering grounds.

The monarch migration is one of the greatest phenomena in the natural world. Monarchs know the correct direction to migrate even though the individuals that migrate have never made the journey before. They follow an internal “compass" that points them in the right direction each spring and fall. A single monarch can travel hundreds or even thousands of miles.

The monarch population has declined by approximately 90 percent since the 1990s. Monarchs face habitat loss and fragmentation in the United States and Mexico. For example, over 90 percent of the grassland ecosystems along the eastern monarch’s central migratory flyway corridor have been lost, converted to intensive agriculture or urban development. Pesticides are also a danger. Herbicides kill both native nectar plants where adult monarchs feed, as well as the milkweed their caterpillars need as host plants. Insecticides kill the monarchs themselves. Climate change alters the timing of migration as well as weather patterns, posing a risk to monarchs during migration and while overwintering. The U.S. Fish & Wildlife Service is currently reviewing the species’ status.

One easy way to help monarchs is to participate in the National Wildlife Federation's Garden for Wildlife program by planting a pesticide-free monarch habitat garden filled with native milkweed and nectar plants. North America has several dozen native milkweed species, with at least one naturally found in any given area. Use these regional guides to the best native nectar plants and milkweed for monarchs in your area. Listed plants are based on documented monarch visitation, and bloom during the times of year when monarchs are present, are commercially available, and are hardy in natural growing conditions for each region. You can get information about additional butterfly and moth host plant species native to your zip code using the Native Plant Finder.

Planting locally native species is the best option for helping monarchs because monarchs coevolved with native plants and their life cycles are in sync with each other. In the last decade tropical milkweed (Asclepias curassavica), a plant not native to the United States, has become an increasingly popular way to attract monarchs in garden settings. Tropical milkweed is ornamental and easy to grow, and has become one of the most available milkweed species in nursery trade. Monarchs happily lay eggs on it. Despite these qualities, when planted in southern states and California, tropical milkweed can encourage monarchs to skip their migration and continue to breed through the winter, potentially putting them at risk for disease and other complications that they would have avoided by migrating. The National Wildlife Federation encourages planting native milkweed and cutting back tropical milkweed in the fall to encourage monarch migration.

In addition to the Garden for Wildlife program, National Wildlife Federation campaigns such as Butterfly Heroes engages kids and families in bringing awareness to the declining monarch population and gets them involved in helping monarchs and other pollinators. Through the Mayors' Monarch Pledge, cities and municipalities are committing to creating habitat and educating citizens about how they can make a difference at home for monarchs.

Roadsides also offer habitat and respite for migrating butterflies and are the focus of a coordinated Monarch Highway effort by the National Wildlife Federation and partners along Interstate I-35, located along the monarch’s central migratory flyway. The National Wildlife Federation also works with the agriculture community and lawmakers to protect and to increase monarch habitat and declining grassland ecosystems.

The National Wildlife Federation recommends that the best way to help monarchs is by restoring their natural habitat by planting native milkweeds and nectar plants, eliminating pesticides, and encouraging others to adopt these practices. Due to the risks of spreading disease, limiting healthy genetic diversity, and bypassing natural selection, the National Wildlife Federation does not support the rearing of monarch caterpillars in captivity, or the mass release of commercially farmed butterflies.

Monarch butterflies communicate with scents and colors. The males attract females to mate by releasing chemicals from scent glands on the hind wings. Monarchs signal to other animals that they are poisonous by having bright orange wings. The bright colors serve as a warning that predators should attack at their own risk.