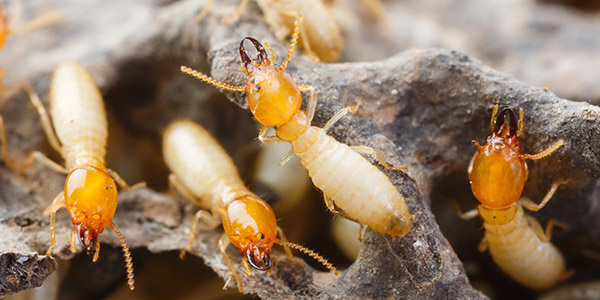 Termites are sometimes called “white ants” because of their pale coloring and physical similarities to ants. However, there are several ways to tell ants apart from termites. Like bees and wasps, ants have a narrow waist that segments their bodies—termites do not. Ants also have segmented or “elbowed” antennae, while termite antennae are straight. Both ants and termites have winged reproductive forms, but the forewings and hind wings of ants are different sizes, and those of termites are equal in size.

Most termite species are found in the tropics, but several dozen species are found throughout the United States, including Hawaii, Puerto Rico, and the U.S. Virgin Islands. Alaska is the only U.S. state without termites. Depending on the species, termite nests are found underground, in dead trees and stumps, in the tops of live trees, and in wooden structures. Ants are among the biggest predators of termites.

Termites obtain nutrients from wood and plant materials, but they can’t digest their food on their own. Instead they have symbiotic protozoa and bacteria in their guts to break down the tough plant fibers.

Something all termite species share is a caste system. At the lowest level are the workers. These termites are sexually and developmentally immature. Workers take part in building out the nest, locating food, and caring for young. Soldiers are the next step up in the caste system. Like workers, they are immature in form, but in some species, they have well-developed mandibles for defense. Then there are the reproductives (also called alates), winged males and females that are the product of mature colonies. Alates swarm in warm weather and form pairs of males and females. These “primary reproductives” lose their wings and become kings and queens of new colonies.

There are several families of termites, and each has a different life history. Subterranean termites are found in both the eastern and western United States and cause the most damage to homes. The Formosan subterranean termite in the West is not native to the U.S., and they spread fairly quickly. Subterranean termites decompose plant matter in the soil. To go aboveground, they build earthen tubes to protect themselves from desiccation, or drying out. Dampwood termites also require moisture and move from rotting tree stumps and logs across the forest floor. Drywood termites are less susceptible to desiccation and spend their lives aboveground in dead trees or buildings.

Not much thought has been given to termite conservation, considering termites cause structural damage to buildings. However, termites only come into our homes because we’ve built them over their former habitat. Termites can be beneficial because they decompose dead plant matter and return the nutrients to the ecosystem, just like earthworms and fungi. It’s important to note that they are a valuable component of many ecosystems.

University of Arizona College of Agriculture and Life Sciences