First featured in a 1965 issue of National Wildlife magazine, these timeless recipes remain surefire staples for any camper’s cookbook. Whether you’re cooking on top of a fire, a griddle, or a gas grill, these foods are sure to please. 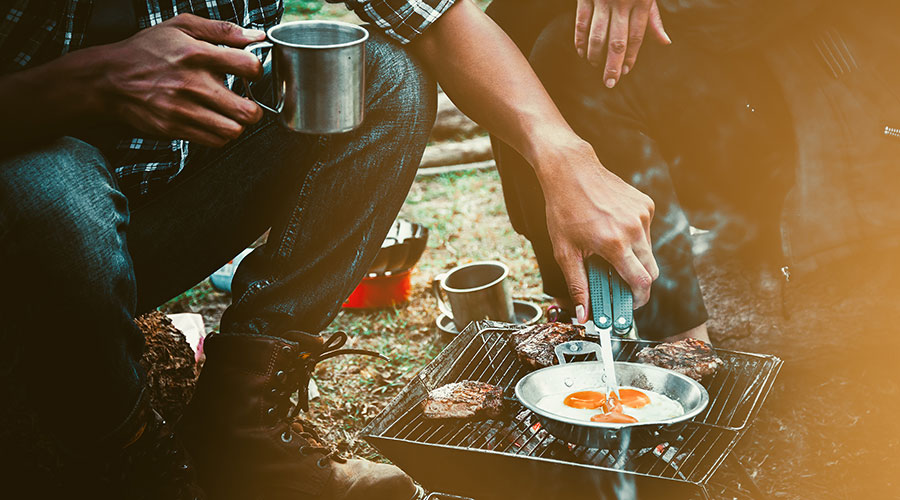 Fried eggs: Get a tablespoon of fat just hot enough to sizzle a test drop of water. Break in the eggs, then take the frypan immediately off the fire. Keep the heat low so the whites won’t get tough, then baste the yolks until they are well filmed. Baste the eggs with the hot fat for three or four minutes, add salt and pepper, and serve on a warm plate.

Scrambled eggs: This simple trick will make all the difference: Instead of adding milk, which has a tendency to toughen scrambled eggs, try a tablespoon of cold water for each egg. Mix the eggs and water with salt and pepper to taste. Then heat a tablespoon of fat in a frypan just hot enough to sizzle a drop of water. After tipping in the egg mixture, reduce the heat. Stir the eggs constantly with a fork when they begin to harden. Remove the eggs while they are still creamy and soft.

Alternatively, brown a couple of diced onions with a little grease in a frypan. When these have cooked to a dark blandness, add a small can of tomatoes. Let them begin to bubble. Then break in six eggs. Season with salt and pepper.

Start bacon in a cold pan to avoid a leaping mass of flames on your frying pan. Fry the bacon slowly over a few coals poked to one side of the campfire. Turn the slices occasionally. If you like them crispy, keep tipping the fat into a handy container where it can be kept for future camp use. 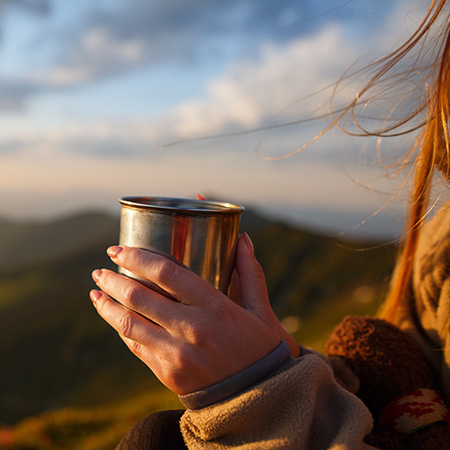 That first cup of coffee can make all the difference. Drop a rather coarse blend into cold fresh water. Add two level tablespoons for every cup of water. This proportion can be varied for weaker or stronger brews.

Suspend or set this over the fire. Keep a close eye on it. Once it has boiled up, lift it to a warm place where no one will be apt to stumble over it. Let it take on body for five minutes, then sip and enjoy.

Fresh frypan bread is a simple thing to cook on the trail. The handiest method is to mix the dry ingredients before leaving your supply base. The following basic mix, given here in one-person proportions, will stay fresh six weeks or more in camp if kept sealed, dry, and reasonably cool:

If this mix is being readied at home, sift the flour before measuring it. Then sift together the flour, baking powder, and salt. Cut in the margarine with two knives, with an electric mixer at low speed, or with a pastry blender, until the mixture resembles coarse meal. For increased food value, add two tablespoons of powdered skim milk for every cup of flour. Place and seal in plastic bags.

If mixing at camp, do it with the ingredients at hand and in the simplest way possible. Any solid shortening may be utilized if the mix is to be used within a short time. Such mix may be carried, if you want, in a glass jar or just folded in wax paper.

When the fire is going and everything else is ready, quickly add enough cold water (about 1/3 cup) to the mix to make a firm dough. Shape this rapidly into a cake about an inch thick. Lay this in a warm frypan. Hold it over moderate heat until a crust forms on the bottom, rotating the pan so the loaf will move enough to not stick. Once the dough has hardened enough to hold together, turn the loaf. Do this several times until the bread has baked to an appetizing brown on both sides. The frypan bread should be done within 15 to 30 minutes, depending on the heat, which should be moderated. When a twig shoved into the loaf returns without any dough on it, it’s time to eat. 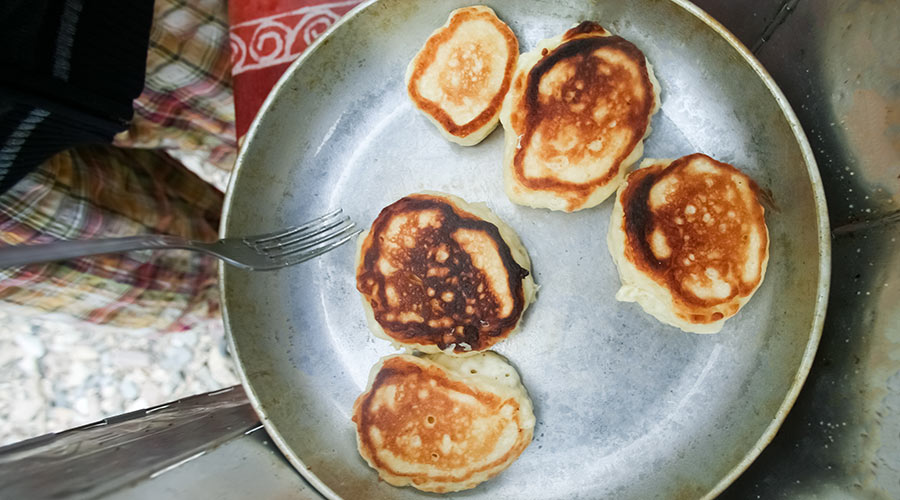 All you need to start is the same basic mix that made such delicious frypan bread. For one-person proportions, add 1/2 cup of milk and mix in a whole or dried egg to the dry mix. This milk can be diluted evaporated milk or reconstituted dry milk. Stir only enough to moisten the flour.

If the flapjack batter seems too thick to pour easily, thin it with just a little milk. On the other hand, a little extra flour will provide stiffening. But if the batter is on the thin side, the flapjacks will be tenderer.

Let the frypan become hot, then wipe it sparingly with bacon rind. Do not let the metal reach smoking temperatures. Turn each flapjack only once, when it begins showing tiny bubbles. The second side will take only about half as long to cook. Serve steaming hot with your favorite topping.

A good way to cook this vegetable is to bake the large ones in their skins on hot ashes, not glowing coals, until they become well blackened on the outside. They’re done when a thin, sharp stick will poke easily through their centers. Rake the potatoes out, break them in half, and serve at once with salt and butter. Consider adding sliced onions, peppers, and bacon to create a delicious dish.

If you can, cook a one-pound boneless sirloin, two inches thick, for each camper. Wipe the steaks well with a clean damp cloth, then rub with a mixture of four-parts salt and one-half-part black pepper. A good trick at the start is to get a glowing bed of coals, then scatter on a few hardwood chips or shavings. These will flare up enough to help seal in the juices and assure that flavorsome char relished by so many.

In any event, if you’re using a grill, get this hot and rub it with suet. If you’re using a frypan, let this also get hot, but do not add any grease and tip out any sputtering from the meat. Sear the steaks quickly on both sides. Then cook to individual tastes.

Lean meat cooks more quickly than fat meat. Aging also progressively shortens the cooking time. Then there are factors such as size, shape, and amount of bone. Outdoor fires add another variable. A practical way to test is to prick the steak with a pointed knife. If red juice wells out, the meat is rare; pink, medium rare; colorless, well done. 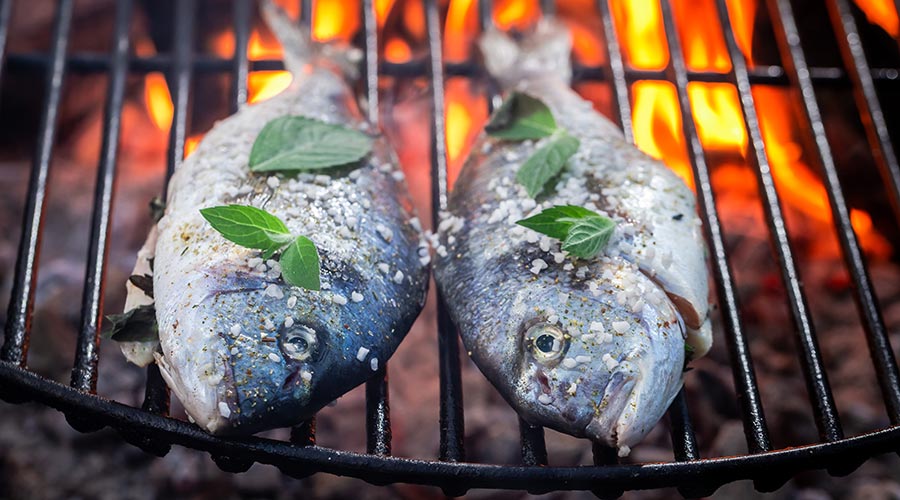 To keep your catch moist and tender, and to bring out its delicate flavor, cook it only until the flesh is no longer translucent. Once the fish is easily flaked, it’s done. Enhance the taste by salting, inside and out, an hour before frying. Or sprinkle the inside with pepper and lemon juice just before it goes on the heat. The best final topping? Good, fresh butter.

Get the frypan or griddle just hot enough that the butter or margarine barely begins to tan. Roll the fish in crumbs, flour, or corn meal if you want. Brown the fish on both sides, only until flaky. Then add any more desired salt, butter, and perhaps a few drops of lemon juice. When one ridge after another is lifting in front of the water-reflected sun as you eat, and a breeze is starting to trumpet a cool blue note, this is camp food you’re never going to forget. 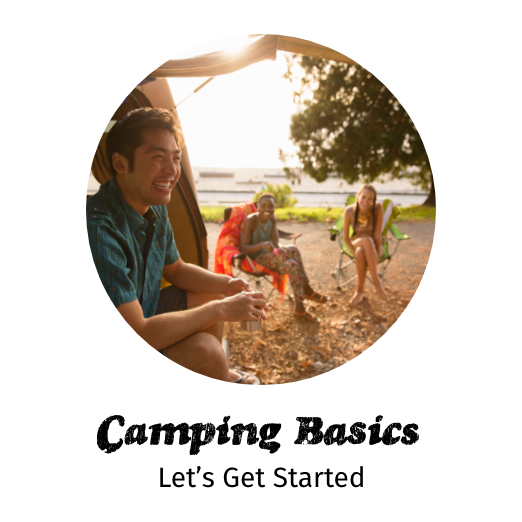 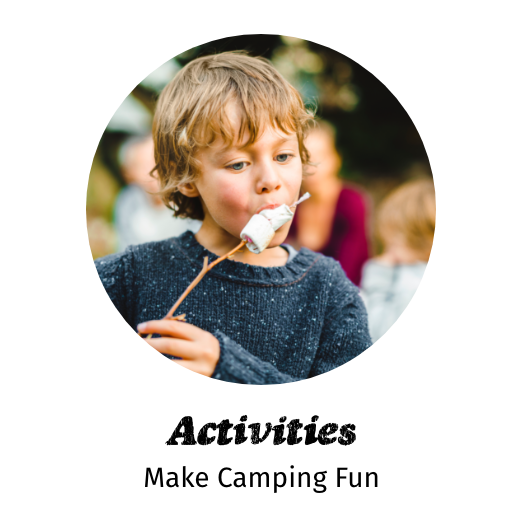 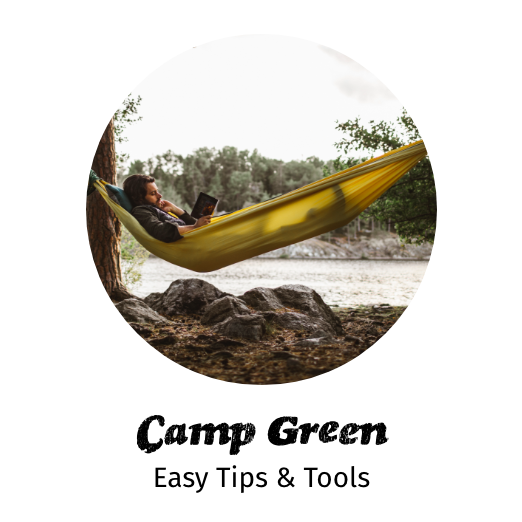