"Connecting kids with nature is essential to their health, intellectual development, happiness—and inspiring the next generation of wildlife conservationists." 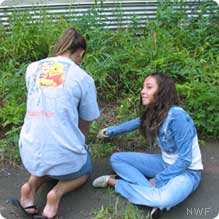 A partnership between the National Wildlife Federation and the U.S. Fish and Wildlife Service is giving students in the Denver area and across the country a hands-on knowledge of native ecosystems and wildlife and giving national wildlife refuges more opportunities for public education and outreach.

Collin O’Mara, NWF CEO and president, joined staff at the Rocky Mountain Arsenal National Wildlife Refuge and students and staff from two Denver-area schools Thursday to announce grants that will be used to develop schoolyard native habitats mirroring ecosystems found at the refuge just north of the Denver city limits. Heritage Elementary School in Highlands Ranch and Compass Montessori School in Golden are among 24 schools nationwide chosen to participate.

"Connecting kids with nature is essential to their health, intellectual development, happiness—and inspiring the next generation of wildlife conservationists.  The National Wildlife Federation is excited about partnering with the U.S. Fish and Wildlife Service and the schools on this project, which touches on so much of what’s important to NWF’s work, including expanding conservation education and expanding habitat for wildlife,” O’Mara said. “This program and other education efforts will help shape the conservationists of tomorrow and show people how much the Rocky Mountain Arsenal National Wildlife Refuge and other public lands have to offer."

"The Fish and Wildlife Service worked closely with the National Wildlife Federation on building support to transform the arsenal into a wildlife refuge. This is another example of the kind of good work we can do by teaming up with conservation organizations and reaching out to the public. As the students plant the seeds for the grasses and other native plants, they will be sowing the seeds of good stewardship and wildlife conservation for future generations," said David Lucas, project leader of the Rocky Mountain Arsenal National Wildlife Refuge Complex.

Heritage Elementary and Compass Montessori will each receive a $2,500 grant to plan, establish or modify habitat at their schools to replicate ecosystems at the Rocky Mountain Arsenal refuge. The goal is to work with refuge employees to provide shelter and food sources for pollinators, migratory birds and wildlife on the school grounds.

Students and staff at both schools are already involved in conservation activities. Heritage is a Green Flag school, the highest level of accomplishment in NWF’s EcoSchools program, and has a vegetable garden and a chicken coop on school grounds. Compass Montessori has a schoolyard wildlife habitat and a 2.5-acre working farm, with a vegetable garden, a small orchard, four pigs and two alpacas.

"This grant will allow Compass Montessori to create a link between our 7-year-old, NWF-certified schoolyard habitat and a new geodesic dome greenhouse. It is our dream that this habitat will expand the natural environs and attract pollinators and birds,” science teacher Eric Albright said. “Montessori philosophy believes that students thrive when connected to the natural world and that this schoolyard habitat will provide a place of work, wonder and investigation for students from age 3 through 18."

Heritage hopes to work with wildlife refuge employees to create a garden to attract pollinators and plant native grasses, said Alisa Pauley, the principal. Students will plant items that relate to their science or social studies curriculum.

"This area will further develop into an outdoor classroom space for all of our students to experience environmental studies and other integrated content in a hands-on, sustainable way," Pauley added.

Having a national wildlife refuge nearby is a great chance for students to take advantage of a wealth of expertise and to see firsthand the kinds of landscapes they will shape, said Kevin Coyle, NWF’s vice president of education and training.

"The Rocky Mountain Arsenal National Wildlife Refuge offers school children in the Denver and Boulder area an opportunity to see and study nature as it was 200 years ago.  There are few places where such a wild place is so close to a major city," Coyle added. "It shows the abundance of wildlife, native grasses and wild features that drew Native Americans and European settlers to the area."

For Tom Dougherty, the partnership among NWF, the Fish and Wildlife Services and the schools is another milestone in the quest he and others launched after cleanup and reclamation began at the site where chemical weapons and pesticides were once produced. The idea to turn 15,000 of the acres into a wildlife refuge took hold as wildlife, including bald eagles, moved into the huge open spaces. More than 330 species of wildlife, including bison, deer, coyotes and burrowing owls, make their homes there.

"The Rocky Mountain arsenal refuge is providing shelter for wildlife and a one-of-a-kind experience for Denver-area residents, some of whom might not otherwise get a chance to enjoy nature," said Dougherty, the former regional NWF executive director and a former NWF board member. "It was gratifying to have been part of making the refuge a reality and it’s gratifying that it can be a source of inspiration and learning for our young people."