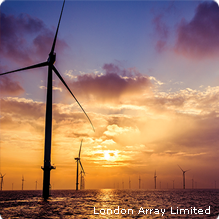 The University of Delaware’s Special Initiative on Offshore Wind (SIOW) has released a new study showing that strategic policies and state actions taken by New York State leadership, as well as in many other Atlantic Coast states, can infuse much-needed certainty into the market to allow for large-scale offshore wind development. When combined with the anticipated downward trajectory of the cost of technology, the study indicates that project costs can be lowered by as much as 50 percent.

“As the nation’s first five offshore wind turbines, with all their financing and permits, start to be constructed this summer not far from New York waters, we need bold leadership from the Empire State,” stated Curtis Fisher, NWF Northeast Regional Executive Director. “To realize New York’s clean energy future, we need to see the SIOW’s findings implemented with leadership from the Cuomo Administration and the Legislature.”

The report, released at the European Wind Energy Association’s Offshore 2015 conference in Copenhagen, was prepared for the New York State Energy Research and Development Authority (NYSERDA). The study details a roadmap New York State leaders can follow to reduce the cost of realizing the state’s massive offshore wind power opportunity.

NYSERDA President and CEO, John B. Rhodes, touted the State’s interest in tapping its offshore wind fortune with the release of the report: “New York State is laying the groundwork to bring closer the potential of large-scale development of offshore wind and accelerate the cost savings we expect can be achieved through identified actions… [O]ffshore wind has the potential to support the State’s energy goals under Governor Cuomo. While offering the promise of a vast renewable energy resource for the state’s most populous region, it will also bring with it economic development, job creation, and a cleaner environment.”

The SIOW study concludes that the following state interventions can significantly reduce the cost of advancing offshore wind power for New York:

Provide a high degree of site characterization for early projects;
Lend the State’s favorable borrowing conditions;
Facilitate through policy revenue contracts that substantially reduce risk to lenders;
Create market visibility that draws greater competition among suppliers and contractors and draws a different class of investors to New York projects;
Develop policies related to siting and offshore transmission that support offshore wind projects;
Develop the infrastructure to reduce costs, including both port facilities and a trained workforce.
“Offshore wind is one of the strongest and most reliable options we have to address climate pollution,” said Conor Bambrick, Air and Energy Director for Environmental Advocates of New York. “The SIOW report has given us the roadmap, now it is up to New York to take charge and lead the way.”

"It is time for Governor Cuomo to commit to a bold, long-term, job creating, offshore wind program for New York and his Administration should take action this year to spur the development of 5,000 MW of offshore wind power by 2025 to ensure offshore wind plays a major role in New York’s energy future,” said Lisa Dix, Senior New York Representative for the Sierra Club.  “Investing now and over the long term to build offshore wind will cut dangerous climate pollution, diversify New York’s energy mix, protect ratepayers from volatile energy bills, and will create jobs, economic development and new manufacturing opportunities for New Yorkers.”

“It’s exciting to see a well thought out plan to advance offshore wind on the east coast.  Over the last five years, the greatest barrier to offshore wind has been cost.  This new report identifies strategies to reduce costs by 50%, now New York has to muster up the political will power and make our state a leader in offshore wind development,” said Adrienne Esposito, Executive Director of Citizens Campaign for the Environment.

"This study provides even further confirmation that offshore wind is close within reach for New Yorkers and ready to deliver clean electricity," said Anne Reynolds, executive director of the Alliance for Clean Energy New York. "The Empire State is a recognized leader in energy innovation, and we hope to see that trend continue with the implementation of these recommended actions."