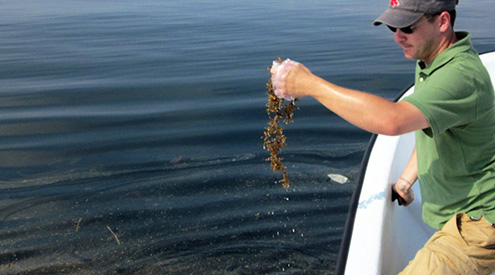 ANN ARBOR, MI — Today, the State of Michigan and Enbridge announced an agreement to explore the option of replacing the Straits of Mackinac section of the Line 5 pipeline with a tunnel under the straits, while setting a deadline of August 15, 2018 to reach an agreement on the future of Line 5. The press release from the office of Governor Snyder can be found here.  The agreement also requires replacement of the Line 5 segment below the St. Clair River and the temporary shutdown of Line 5 when waves in the Straits are extremely high.

The following is an on-the-record statement from Mike Shriberg, executive director of the National Wildlife Federation’s Great Lakes Regional Center and a member of Michigan’s Pipeline Safety Advisory Board.

“The National Wildlife Federation’s primary concern is with the safety and health of the Great Lakes and the people who rely upon them for drinking water, recreation and our economy. We are concerned that this agreement shortcuts exploration of better options for protecting the Great Lakes and our economy by favoring the option of tunneling under the Straits of Mackinac.  This option still leaves Michigan with all the risks of Line 5 while receiving very few of the benefits. It operates under the false pretense that Line 5 is critical energy infrastructure for the state. The agreement appears to favor the interests of Enbridge over those of Michiganders and our Great Lakes.  Under the tunnel scenario, the Great Lakes remain a shortcut for mostly Canadian oil to reach mostly Canadian and export markets without providing significant value to Michigan and the Great Lakes states.

“With this agreement, the state continues to lean heavily on Enbridge to provide critical information when past dealings with Enbridge have proven this to be problematic at best. The Alternatives Analysis report, commissioned by the state, clearly outlines less risky alternatives and notes that fuel supply needs throughout the state can be met by other means. I am personally disappointed that the Pipeline Safety Advisory Board, of which I am a member, was not consulted prior to the Governor reaching this agreement despite our explicit role of providing input, suggesting that our role in this process is ornamental at best. The Governor can and should do better, and we hope he will do so before making a final decision in August.”