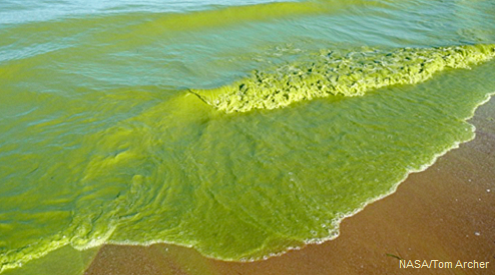 National Wildlife Federation: Actions need to be a catalyst for more comprehensive effort

TOLEDO, OHIO — Yesterday, the state of Ohio took two steps to confront the epidemic of toxic algae that, in recent years, has poisoned drinking water, closed beaches, hurt tourism, increased water utility rates, and threatened fish and wildlife. Both actions are intended to reduce farm runoff pollution into Lake Erie that is the No. 1 cause of toxic algal blooms. The actions include:

The measures, in tandem, will put in place a mechanism for nutrient-reduction plans and funding to implement them in an effort to control farm runoff that accounts for upwards of 85 percent of the pollution that flows into Lake Erie, triggering toxic algal outbreaks. The moves by the state of Ohio target eight areas in the Maumee River basin. The National Wildlife Federation is urging state leaders to act with urgency to promote strong soil and water conservation actions in the entire Maumee River basin.

Gail Hesse, Great Lakes water program director for the National Wildlife Federation, and one of the authors of the 2017 report, said:

“The executive order and legislation set the stage for much-needed action to confront the toxic algae crisis. It is essential that these actions serve as a catalyst for comprehensive action by the state of Ohio to solve this serious threat. The status quo is clearly not working and has put the staggering economic and environmental costs of toxic algae onto people, businesses, utilities, and communities. It will be essential for Ohio’s public officials to accelerate efforts to reduce runoff pollution—including the establishment of water quality goals for these eight areas and a strong framework for accountability. The people of Ohio deserve to know when they can start to see progress in meeting clean water goals to protect Lake Erie, our drinking water, public health, fish and wildlife, and economy.”

The actions come as Ohio attempts to meet its pollution-reduction goals into Lake Erie. It joined the state of Michigan and province of Ontario in agreeing to reduce runoff pollution by 40 percent by 2025 and is struggling to meet the interim goal of 20 percent by 2020. Earlier this year, the state of Ohio listed portions of Lake Erie as impaired under the Clean Water Act, an acknowledgement that the lake is not healthy and needs help, but has failed to date to identify specific sources of pollution, to set targeted pollution limits, and to lay out a timeline to measure progress against.

The actions by the state of Ohio come four years after a toxic algal outbreak in western Lake Erie led to a “Do Not Drink” advisory for more than 400,000 people in and around Toledo.