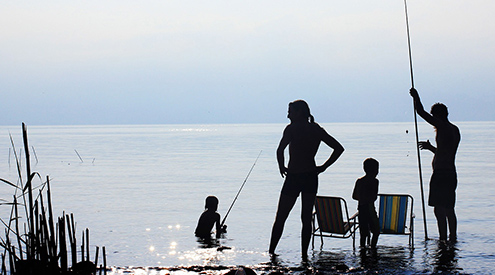 Washington, DC — Climate change is altering America’s summers in ways both disastrously large and insidiously small, according to a new National Wildlife Federation report. Safeguarding Summer details how rising temperatures are giving a boost to everything from heat waves to ticks to toxic algae outbreaks, and recommends policies for averting the worst effects of climate change.

“From sea to shining sea, Americans are facing natural disasters that are exacerbated by climate change, from raging megafires in California to toxic algal blooms in Florida,” said Collin O’Mara, president and CEO of the National Wildlife Federation. “This new report is a wake-up call for all Americans on the need to act now in order to protect our wildlife, communities, and summer activities by promoting climate-smart conservation strategies and supporting the sensible steps to adopt cleaner energy and vehicles.”

"This spring I encountered numerous black-legged (deer) ticks while outdoors,” said Doug Inkley, former NWF Senior Science Adviser (retired). “The doctor put me on antibiotics when a classic bull's-eye rash, characteristic of Lyme infection, appeared. This is nothing like when I was a kid running around in the woods of central Vermont. We didn't even think about ticks because there weren't any here! Now, they seem to be everywhere and I take appropriate precautions whenever I go outside."

To curb the worst harms of climate change, the report calls for actions such as: