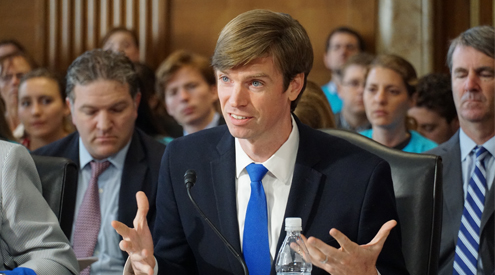 Washington, DC — Fully funding the Land and Water Conservation Fund is the critical next step to secure our public lands and wildlife heritage for future generations, National Wildlife Federation President and CEO Collin O’Mara told senators today. O’Mara, who testified before the U.S. Senate Energy and Natural Resources Committee, said permanently reauthorizing the program in February was a historic step, but a half measure to truly keep nature and wildlife within reach for all Americans.

“There is no more successful outdoor recreation or land conservation program in the world. … This is a remarkable opportunity to help the program realize its full potential by ensuring that the funding is mandatory,” O’Mara told the committee.

“We’re defined by what we leave behind, and this program has done a better job of protecting those places that make America, America than any other thing in our government’s history,” O’Mara later added.

The Land and Water Conservation Fund uses fees from offshore oil and gas revenues — at no cost to taxpayers — to invest in urban parks, walking and biking trails, wildlife habitat, historic sites, national parks and other open spaces. Since its inception in 1964, the Land and Water Conservation Fund has created or supported more than parks, hiking trails, wildlife areas, historic sites, and other outdoor spaces in every state across the nation. Despite being authorized to spend $900 million each year, Congress has only twice funded it at the full amount.

The full funding bills that have been introduced in the House and the Senate would permanently end that practice and give communities, land managers and conservationists more long-term certainty as they planned for parks and other outdoor recreation spaces to be used for generations to come.

The National Wildlife Federation worked closely with Interior Secretary Stewart Udall, Senator Clinton Anderson and Representative Wayne Aspinall to create the Land and Water Conservation Fund in 1964. It also worked with subsequent Congresses to increase the program’s funding and improve its programmatic impact in 1968, 1970, 1977 and 2015.

The National Wildlife Federation worked as part of a broad bipartisan coalition across the country to permanently reauthorize the Land and Water Conservation Fund earlier this year.