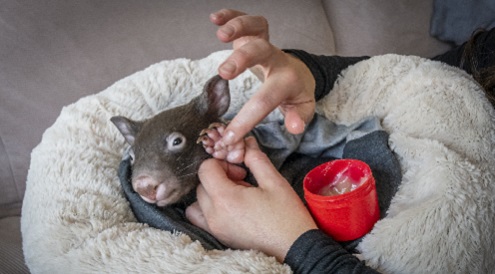 WASHINGTON, D.C. — National Wildlife Federation and Ranger Rick magazine announced Doug Gimesy as the winner of the 2021 Ranger Rick Photographer of the Year Award. Each year this award is given to the professional photographer or photography team whose work in Ranger Rick has most effectively advanced the magazine’s mission: to inspire in young children a love and understanding of wildlife and the natural world.

Doug is a professional conservation and wildlife photojournalist who focuses on Australian issues. Initially trained as a zoologist and microbiologist, he later completed a Masters of Environment and a Masters of Bioethics. Together, these two qualifications helped shape his thinking about what type of issues he should be focusing on: conservation and animal welfare issues.

“Doug brings so much joy and passion to his work as a wildlife photographer—it’s palpable in the photos he presents and the stories he portrays,” said Susan McElhinney, Ranger Rick’s photo editor. “Through his photography, our readers not only learn more about extraordinary wildlife, but are also able to experience his journeys and perspective right from home.”

In his most recent Ranger Rick story, Doug showcased a group of wombat joeys that were cared for by a young woman in her Australian apartment until they were ready to be released back into the wild. The story touches on the struggles wildlife groups have faced during the pandemic lockdowns. Doug’s other work has focused on the conservation and animal welfare issues facing the platypus and the grey-headed flying fox. Recently he facilitated the platypus being listed as threatened species in his home state of Victoria. And last year, he and his partner published a children’s book, Life Upside Down: Australia’s Grey-Headed Flying Foxes.

Ranger Rick Photographer of the Year aims to encourage excellence in photography and to advance visual literacy in the field of natural history. It’s through stories like Doug’s that Ranger Rick readers are able to immerse themselves in the world of wildlife, opening their minds and instilling a passion that, for many, carries on throughout their lifetime.

Along with the distinction of winning the award, Doug receives a $1,000 prize and an announcement in the June/July 2022 issue of Ranger Rick.