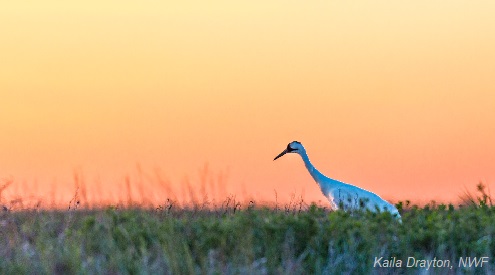 AUSTIN, Texas — The prized and productive wetlands, bays, and estuaries of the Texas Mid-Coast require decisive policy interventions to defend against multiple climate-related threats, according to new analysis from the National Wildlife Federation’s Texas Coast and Water Program.

While the study indicates the coast is changing at an accelerating pace, the authors emphasize end-of-century projections are non-static and adaptive solutions such as ecosystem-based investments this decade could help combat emerging threats and build resilience across the region.

“The data shows the Texas Mid-Coast’s unique estuarine ecosystems, growing population, and critical economic sectors are all under significant threat from climate change,” said Dr. Arsum Pathak, lead author of the study and Adaptation and Coastal Resilience Specialist at the National Wildlife Federation’s Texas Coast and Water Program. “This report provides a first-ever detailed analysis of what the latest climate projections mean for this region and how we can build its resilience moving forward. With another active Atlantic Hurricane season set to start June 1, now is the time for local and state decision-makers to utilize these findings, escalate adaptation and restoration priorities, and protect this treasured region.”

“From its extensive wildlife refuges to its vibrant fishing and tourism industries, the Texas Mid-Coast is a vital region we need to protect for future generations,” said Amanda Fuller, director of the program and co-author of the study. “This report not only localizes climate projections to identify key threats to the region, it identifies viable policy interventions that suggest all is not yet lost. We call on decision-makers, community leaders, and conservationists to come together now to save the beloved ecosystems and critical economic drivers of the Texas Mid-Coast.”

The Texas Mid-Coast is home to multiple National Wildlife Refuges, Wildlife Management Areas, and Texas State Parks. It is the only natural wintering home for the whooping crane, one of the world’s most endangered birds and the tallest bird in North America.