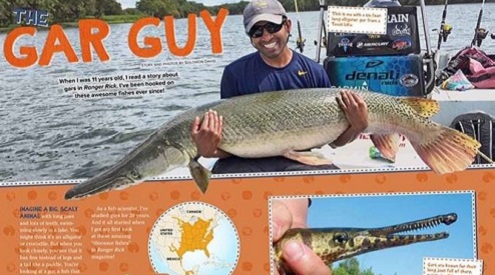 “Solomon is a scientist, and he’s also an incredibly gifted natural writer. With his enthusiasm for lesser-known creatures and his ability to make those animals seem appealing, he’s capable of inspiring future generations to learn about—and protect—the natural world,” said Hannah Schardt, editor-in-chief of Ranger Rick. “We couldn’t have selected a contributor who better embodies what Ranger Rick is all about.”

"I have GAR-gantuan gratitude for the opportunity to contribute to the mission of Ranger Rick,” says David, who is known among friends, family, and his large Twitter following for his love of gar puns. “Being able to share stories about these amazing creatures with the next generation, including my own children, is a dream come true."

Solomon David is an aquatic ecologist and assistant professor of biological sciences at Nicholls State University in Louisiana, where he and his team study the ecology and conservation of freshwater fishes. Much of David’s field research focuses on ancient fishes called gar, including the alligator gar, one of North America’s largest freshwater fishes. David’s origin story is steeped in Ranger Rick: As a child, he first learned about gars from an illustrated story in the magazine. He quickly became enamored with the unusual and ancient creature and continued to study it while completing his master’s degree and Ph.D. at the University of Michigan. Since then, he founded the GarLab at Nicholls State University, becoming a leading gar scientist and conservationist.

David first contributed to Ranger Rick in February 2020 with an article titled The Gar Guy that focused on the natural history of these living fossil fishes. His latest article, in the November 2021 issue of Ranger Rick, will introduce Ranger Rick’s young readers to sturgeons, another ancient and fascinating family of fishes.