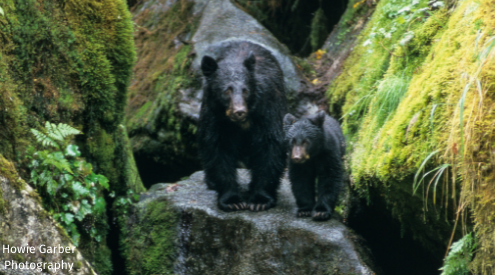 Restoring Protections in the Tongass Will Benefit Wildlife, People, Climate

DENVER  – Restoring Roadless Rule protections for the Tongass National Forest will improve wildlife habitat, protect the nation’s largest old-growth forest, and ensure the vitality of the local economy in Southeast Alaska. The National Wildlife Federation and the Southeast Alaska Conservation Council applaud the Biden Administration for beginning the process to restrict development on more than 9 million acres of North America’s largest temperate rainforest. A public comment period on the protections will begin next week.

“There are so many reasons to protect this national treasure. The Tongass is home to diverse wildlife, sacred Indigenous sites, endless outdoor recreation opportunities, and thriving commercial fisheries. The old-growth forest also plays a vital role in storing carbon,” said David Willms, senior director of Western wildlife and conservation at the National Wildlife Federation. “Restoring Roadless Rule protections is the right thing to do for wildlife and people alike.”

“The Biden administration’s announcement today marks a critical inflection point in the long history of the fight to protect the Tongass National Forest,” said Meredith Trainor, executive director of Southeast Alaska Conservation Council. “Beginning Tuesday, we need both Alaskans and Americans across the country to show up once more to speak out on behalf of our forest, and to once again submit comments supporting the restoration of the national Roadless Rule to the Tongass, so we can spend the next three years of the Biden administration doing the legwork to make these decisions real and lasting."

In July, the Biden administration announced it would end industrial old-growth logging in the Tongass, other than micro sales and for traditional Indigenous uses. It also said it would begin consultations with Tribal governments, Alaska Native corporations, and regional stakeholders to allocate funding for sustainable economic development.

The Tongass National Forest is home to a remarkable diversity of wildlife, including rare Alexander Archipelago wolves, Sitka black-tailed deer, brown bears, and bald eagles. Every year more than a million people visit the Tongass to enjoy the old grown forest and to hunt, fish, hike and camp there. The forest supports a robust economy of tourism, commercial and sport fishing, and many other small businesses.