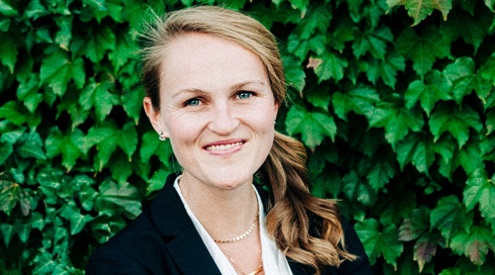 BOSTON — The National Wildlife Federation, America’s largest and most trusted conservation organization with 52 state and territorial affiliates and more than six million members and supporters, announced that Amber Hewett will lead the organization’s offshore wind program and work across the Federation, its affiliates, and allies to expand responsibly sited, developed, and operated offshore wind power.

“Offshore wind power is not only a critical facet of our national climate strategy, but also a top priority for the Biden Administration and coastal states. Offshore wind also needs to be sited, developed, and operated in ways that ensure wildlife and the people whose work and way of life depend upon them can thrive,” said Collin O’Mara, president and CEO of the National Wildlife Federation. “Amber is a nationally recognized leader and will bring a collaborative approach to this essential work.”

“Offshore wind power has so much to offer as both a climate solution and an economic driver. Getting this right — protecting wildlife and directing benefits to the people and places that need them most — will be transformational,” Hewett said. “I’m honored to take on this role and look forward to expanding our partnerships to help ensure that responsibly developed offshore wind power rises in this moment, and is the very best it can be.”

Hewett assumed her new role after nearly nine years of work on National Wildlife Federation campaigns across its Northeast region. She started her career in the National Wildlife Federation’s National Advocacy Center in Washington, D.C., before returning to her hometown on the north shore of Massachusetts to focus on advocating for the responsible development of offshore wind power. She has worked to advance state and federal policies that will both help launch a robust U.S. offshore wind industry and ensure wildlife, habitat, and communities are protected throughout every stage of development.

Hewett assumed her new role following the departure of Catherine Bowes, who built and led National Wildlife Federation’s offshore wind program for 11 years as part of an 18-year career with the organization.

“I could not be more proud of the progress that the National Wildlife Federation and our many partners have made in launching this critical climate change solution for America” Bowes said. “Amber Hewett has brought vision, determination, and endless positive energy to the program for nearly a decade and is more than ready to continue and expand the National Wildlife Federation's leadership at this pivotal moment in America’s offshore wind story.”

Hewett graduated from the University of Massachusetts Amherst with a B.A. in Political Science and a B.S. in Earth Systems. Her passions include sailing, paddling, biking to the beach, engaging in her community and local politics, and getting outside with her niece and nephew.