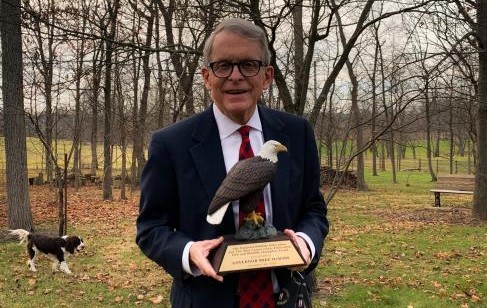 “The National Wildlife Federation applauds Gov. DeWine for prioritizing clean water in his proposed budget by fully funding the H2Ohio program and introducing his Strengthening Ohio’s Communities Initiative,” said Gail Hesse, Director of Great Lakes Water Programs for the National Wildlife Federation. “Gov. DeWine is advancing a budget that recognizes the need for improved water quality and clean water for Ohio as critical investments for a post-pandemic future.”

“Ohio's sportsmen and women and the wildlife they depend upon will benefit from H2Ohio spending directed at reducing nutrient run-off and improving quality aquatic habitat through wetlands restoration by the Ohio Division of Wildlife,” said Matt Misicka, Executive Director of the Ohio Conservation Federation.

The National Wildlife Federation and the Ohio Conservation Federation presented Gov. DeWine with a Fish & Wildlife Champion Award in 2020, citing in part the launch of his H2Ohio initiative.

The mission of the Ohio Conservation Federation is to serve as the leading voice for sportsmen conservationists promoting the wise use and stewardship of Ohio’s wildlife and natural resources.

The National Wildlife Federation is the nation’s largest conservation organization representing 6 million members and supporters and 52 state and territorial affiliates. Its mission is to unite all Americans to ensure wildlife thrive in a rapidly changing world.