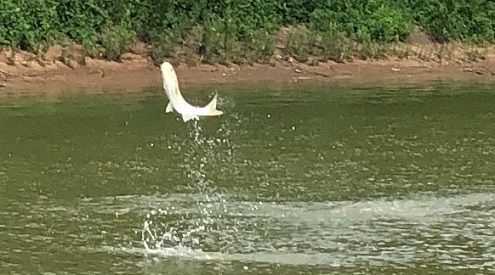 Last year, Congress approved the Brandon Road project and authorized its $858 million estimate.  However, the non-federal cost-share of 20% is “beyond the capacity of the Great Lakes states to match,” the governors write. They state that “the region’s $7 billion commercial and sport fishing industry and $15 billion recreational boating industry would be devastated if invasive carp were to become established in the Great Lakes and St. Lawrence River.” Illinois is the non-federal sponsor as the project is located in Illinois at a chokepoint on the Des Plaines River below the Chicago Area Waterway System. Michigan and Illinois signed an agreement a year ago whereby Michigan provided $8 million of the approximately $10 million non-federal cost share of the planning, engineering and design (PED) phase of the project. The letter asks for full federal funding for the remainder of the design, construction, engineering and maintenance.

“Invasive carp are a national problem requiring a national solution. We thank the eight Great Lakes governors for supporting full federal funding for the Brandon Road Lock and Dam project because they recognize both the national and international scope of the harm if invasive carp were to become established in the Great Lakes. The stakes are too high to risk this project stalling due to a lack of funding from states which should not have to bear the burden of the cost on their own. There is ample precedent for large-scale projects of national importance to be full federal projects– including the current electric barriers in the Chicago Area Waterway System and the Soo Locks. The Brandon Road Project deserves the support of a full federal investment to protect our Great Lakes, our economy and way of life.”