Battle of the Titans

What happens when a sperm whale clashes with a giant squid at sea? 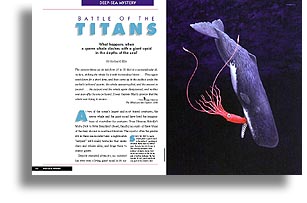 The serpent threw up its tail from 25 to 30 feet in a perpendicular direction, striking the whale by it with tremendous blows. . . . They again went down for a short time, and then came up to the surface under the packet´s larboard quarter, the whale appearing first, and the serpent in pursuit . . . the serpent and the whale again disappeared, and neither was seen after by any on board. It was Captain West´s opinion that the whale was trying to escape. . . .

Rev. Henry Cheever
The Whale and His Captors, 1859

As two of the ocean´s largest and most feared creatures, the sperm whale and the giant squid have fired the imaginations of storytellers for centuries. From Herman Melville´s Moby Dick to Peter Benchley´s Beast, fanciful accounts of these titans of the deep abound in maritime literature. The squid is often the greater evil in these sea-monster tales: a nightmarish "serpent" with snaky tentacles that seizes ships and whales alike, and drags them to watery graves.


Despite repeated attempts, no scientist has ever seen a living giant squid in its native habitat. We know they exist because we have seen their carcasses. And, more ominously for the squid, we have found their remains in the stomachs of captured sperm whales. From the latter evidence, we know that the squid is on the losing end of encounters between the two species. In fact, squid (giant and otherwise) are the mainstays of the sperm whale´s diet. But how do the whales turn fast-swimming squid into meals? This is just one of many mysteries marine biologists are working to solve--and some of the potential answers seem to come straight from 20,000 Leagues Under the Sea.

Written accounts of large squid date back to the Middle Ages, when they were sighted dead on Scandinavian shores. But it was not until 1861 that a giant squid, floating at the surface near the Canary Islands and lassoed by French sailors, was examined by scientists. Since then, almost everything we know about the giant squid has come from examining beached or floating carcasses.

We have learned that giant squid can grow as long as 57 feet, and their eyes can be as large as dinner plates--the largest in the animal kingdom. Like all squid, they have eight arms and two longer feeding tentacles. At the center of the corona of arms, they have a beak like that of a parrot. We aren´t sure what the giant squid feeds on or at what depth it lives.

Much more is known about sperm whales, by contrast. They are among the deepest divers in the mammalian world, able to descend more than a mile and hold their breath for an hour and a half. Bulls can reach a length of 60 feet and weigh as much as 60 tons, but females are smaller, rarely exceeding 40 feet. Their massive ivory teeth--carved by Yankee whalers into scrimshaw--are found only in the narrow lower jaw. What do these huge predators eat? Mostly squid, and occasionally fish.

But how do they catch their tentacled prey? Since the hunt likely takes place hundreds of fathoms beneath the sea, we can only guess. We believe that sperm whales, like dolphins and other toothed whales, are able to find prey through echolocation. From an organ in their heads, the whales broadcast high-frequency sounds into the water, and then read the returning echoes for information on their quarry. But it is one thing to locate a speedy squid, and quite another to catch one.

Scientists first assumed that a whale, after finding squid, simply dashes around and snares them in its massive jaws. But as they learned more about the speed and maneuverability of squid, this assumption seemed flawed. Also, squid in the stomachs of sperm whales do not show any evidence of having been bitten by the whales´ peglike teeth. If the sperm whale does not use its teeth to capture its food, what does it use? An early theory came from Thomas Beale, a British surgeon who shipped aboard a whaler in 1831. He suggested that the whale descends and "remains in as quiet a state as possible, opening his narrow elongated mouth until the lower jaw hangs down perpendicularly." The jaws and teeth, wrote Beale, "being of a bright glistening white colour ... seems to be the incitement by which the prey are attracted, and when a sufficient number are in his mouth, he rapidly closes the jaw and swallows the contents."

A more modern, but no less fantastic, theory was put forward in 1983 by Kenneth Norris of the University of California at Santa Cruz, and Bertel Møhl of Aarhus University in Denmark. Sperm whales and other toothed whales, they postulated, stun their prey with a "sonic boom." After examining the tubes, sacs and other structures in the noses of whales, Norris and Møhl hypothesized that the whales could generate sounds of such intensity that they would debilitate or kill squid. The whales could then use their lower jaws pincer-fashion to pluck the floating squid out of the water--thus explaining the lack of tooth marks on the prey.

The giant squid, on the other hand, may not be the whale-wrestling monster that yarn-spinners portrayed, but a timid creature that may feed on small fish. Some experts speculate that the squid hangs head-down above a school of fish, plucking the creatures from the school with its long feeding tentacles and stuffing them into its beak. As the squid is engaged in feeding, the sperm whale may seize the opportunity to obtain its own meal.

Until someone actually sees a sperm whale hunting, however, we can only speculate about what happens when these two giants meet. This colossal confrontation has thus far defied human understanding; it is one of many enduring mysteries of the deep.

New York artist and writer Richard Ellis´ most recent book is The Search for the Giant Squid (Lyons Press, 1998).