In journeys to the far corners of the Earth, a nature photographer documents the wildlife in rich but troubled places 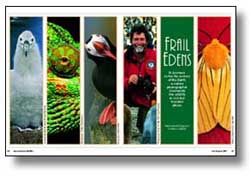 TWENTY-ONE YEARS AGO, as an amateur photographer lured by adventure, I accepted a job as mailman for the U.S. research base in Antarctica. One day near the end of my four-month stay, I came face-to-face with a group of emperor penguins on the sea ice. The pictures I took of them sparked a career in wildlife photography.

Since then, I've traveled to all seven continents and into the lives of many different kinds of animals. Wherever I go, I am awed by the diversity of our fellow creatures and their staggering variety of color, design, adaption and behavior.

But I am also deeply troubled. The species I have come to photograph - large and small, two legs or eight - are rapidly disappearing, largely due to the impacts of an increasing human population on their environments. As a result, I have spent much of the last few years documenting hard-hit ecosystems in an effort to help protect them.

Photographs are among the most potent tools available to conservation. They educate and inspire, revealing what has been lost - and what is worth saving. The pictures here are a sampling from four threatened corners of the globe I have been fortunate enough to visit. 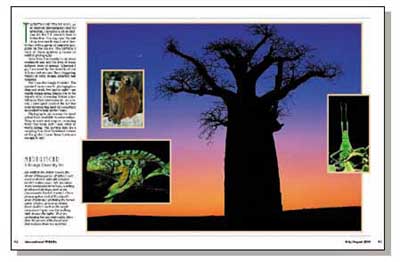 Set adrift in the Indian Ocean, the island of Madagascar off Africa's east coast evolved in splendid isolation for 165 million years. Life has taken many unexpected turns here, resulting in otherworldly trees, such as the characteristic baobob (center). I have photographed most of the island's array of primates, including the brown lemur (top left), as well as smaller forest dwellers, such as the carpet chameleon (above left) and this walking stick species (above right). They are enchanting but also vulnerable: More than 90 percent of the forest land that sustains them has vanished. 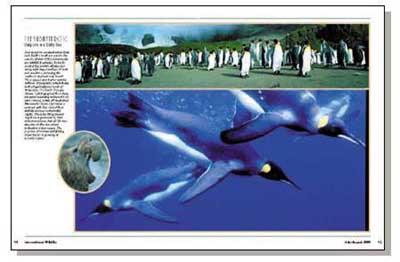 THE SUBANTARCTIC
Outposts in a Chilly Sea
Pummeled by constant winds that lash Earth's southern oceans, the remote islands of the subantarctic are wildlife treasuries: home to most of the world's albatrosses, along with huge numbers of seals and sea lions, including the southern elephant seal (above left). These places also harbor untold millions of penguins, which thrive in the frigid latitudes north of Antarctica. On South Georgia Island, I photographed these king penguins waddling awkwardly on land (top), while off Australia's Macquarie Island, I provided a contrast with this shot of their athletic prowess underwater (above). These far-flung islands might seem protected by their distant locations, but all life here depends on the sea, where protection is less secure. The pressure of commercial fishing in particular is growing at a reckless pace. 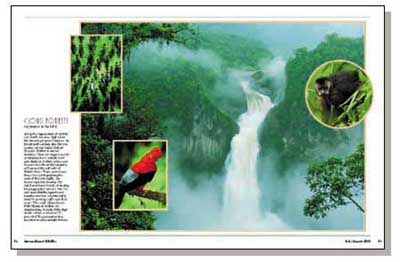 CLOUD FORESTS
Highlands in the Mist
Along the rugged spine of Central and South America, high above the steaming tropical lowlands, lie forests in the clouds, like this one (above center) at San Rafael Falls in Ecuador. Bathed in eternal moisture, these are magical worlds of dripping moss, delicate ferns and clustered orchids, where cool breezes carry the endless peeping of frogs and the soft calls of hidden birds. I have spent many hours here photographing the cock-of-the-rock (above left), the brown capuchin monkey (above right) and many insects, including long-legged flies (top left). But I've also seen that the region's cool weather and rich volcanic soil is ideal for growing coffee and food crops. The result: Cloud forests from Mexico to Bolivia are disappearing. In parts of the high Andes, where as much as 70 percent of the population lives, pressures are increasingly intense. 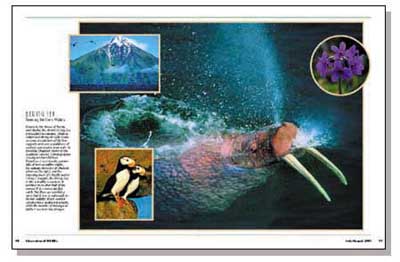 BERING SEA
Teeming Northern Waters
Bound by the shores of Russia and Alaska, the stormy Bering Sea is incredibly productive. Shallow waters and strong currents create an annual explosion of life that supports immense populations of seabirds and marine mammals. At towering Chagulak Island in the Aleutians (top left), I photographed soaring northern fulmars. Elsewhere I recorded the painted bills of horned puffins (above left), the delicate blossoms of Chukchi primrose (top right) and the imposing mass of a Pacific walrus (above). Happily, the Bering Sea is still a healthy ecosystem; it provides more than half of the annual U.S. commercial fish catch. But there are unsettling signs that it, too, is vulnerable to human activity: Many seabird colonies have declined markedly, while the number of endangered Steller's sea lions has plunged.