In a reversal of roles, a tree frog in Australia swallows an unexpected prey 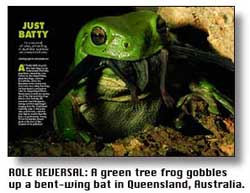 AT TWILIGHT, 110,000 little bent-wing bats in Queensland, Australia, erupt from a limestone cave. Drawn by this winged flurry, green tree frogs, common in Australia, arrive, too.

Elsewhere in the world, bats have been seen eating tree frogs, but here there's a reversal of roles: As herpetologist Bruce Means zeros in with his camera, one of the four-inch-long frogs downs a bat. Initially, the mammal's head disappears, leaving assorted appendages hanging from the amphibian's imposing maw. A few gulps later, and the bat - which is only slightly smaller than the frog - is gastronomic history.

To our knowledge, Means' photo is the first of this behavior to be published.