Second Chance for a Dying Estuary 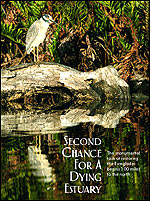 FROM ENCOUNTERS with alligators and downed aircraft to surprised tourists who've seen her and various family members crawling out of the swamp, Maggy Hurchalla has plenty to tell her grandson about her escapades in the Everglades--a place where she's been lost more times than she can count on both hands. But what she doesn't anticipate talking to him about as they peer into South Florida's Indian River is why the fish swimming past are covered with red lesions. "What do you say to a five-year-old then?" she asks, standing on the same dock a few years later.

It wasn't the first time that Hurchalla, a member of the Governor's Commission for a Sustainable South Florida and former Martin County commissioner from 1974 to 1994, had witnessed Florida's environment revolt against the abuses heaved on it. "With the fish, the scream was just more dramatic," she says. "And it's a good thing or we might have ignored the problems again."

Although more than 100 miles north of Everglades National Park, the Indian River Lagoon estuary is part of the historic saw grass slough--the so-called river of grass that in post-World War II America the U.S. Army Corps of Engineers paved, drained, blocked and channeled with widespread approval. The result: an ecosystem in collapse. Now a novel plan that has everyone--the Corps, the South Florida Water Management District, agricultural interests and environmentalists--in agreement just might give the nation's most biodiverse estuary a fighting chance. And Hurchalla was instrumental in making it happen.

Resuscitating this portion of South Florida's watershed--some 500,000 acres in Martin, St. Lucie and Okeechobee Counties--is the first step in the larger 20-year, $8 billion Comprehensive Everglades Restoration Plan, authorized by Congress in 2000. "It's fitting that the plan starts here," says Hurchalla, sliding her kayak from her backyard into the Indian River. "This estuary has been beaten up one too many times."

Photo: © HEIDI RIDGLEY
SWAMP SAVER: Maggy Hurchalla takes a break along one of her favorite canoeing spots in an area of South Florida that she's spent decades trying to protect. The billion-dollar recovery plan for the Indian River Lagoon estuary is an attempt to alleviate the problems caused by excessive development, farm runoff and fresh water flushed from Lake Okeechobee to prevent flooding. The country's most biodiverse estuary, it is home to a range of birds and other wildlife, including black skimmers and royal terns, roseate spoonbills and yellow-crowned night herons.

A Florida native, Hurchalla's love for the outdoors came from her mother, who, incidentally, entered the national folklore as an alligator wrestler when Hurchalla's sister, Janet Reno, became President Clinton's attorney general. At 12, Hurchalla taught herself to scuba dive on the reefs off Plantation Key. By 13, she was giving instructions at a dive shop, inheriting a sign from a local scuba pioneer that read: "Lessons by world famous expert." "It's hard not to fall in love with a place when you've spent nearly every moment of your life exploring some aspect of it from above or below its waters," she says.

Later she tried to pass her obsession for the swamp on to her children, especially once her husband, a snorkeling addict, decided he didn't really appreciate how his wife's back-country canoe trips inevitably turned out: Lost. Her canoeing partner became her youngest son. At 6' 7" he proved a better asset anyway: In the Everglades, he could stand up over the saw grass to see if they should change course. After days of paddling--once past airplane tails jutting from the water (which they later learned were the remnants of two planes that collided while carrying returning World War II troops)--or pulling themselves through the saw grass--sleeves duct taped to gloves to keep their skin from getting slashed--they would finally hit a road, haul themselves up from the swamp and thumb a lift from a trusting tourist back to their car.

While not as mysterious, vast or impenetrable as the part of the Everglades that became the national park, the Indian River estuary--home to some 4,000 plant and animal species, including manatees, dolphins, sea turtles and 800 species of fish--is equally captivating. Mud flats line the mangrove forests along its banks, a perfect spot for green-backed herons, snowy egrets, even roseate spoonbills and endangered wood storks, to stalk fish. River otters are elusive here. More easy to spot are marsh rabbits and a variety of speedy little lizards.

Like all estuaries, this one depends upon a delicate balance of fresh and salt water. But for decades it has been periodically either deluged or dehydrated. At times of limited rainfall, water is held in nearby Lake Okeechobee to meet the demands of ever-growing cities and agriculture, and the marshes lose out, dry up. Too much rain and fresh water flushes straight toward the ocean, changing the estuary's ecological makeup in one giant gush. Add sediment from eroding canal banks and runoff from cattle and fertilizers, and collapse is even more certain. 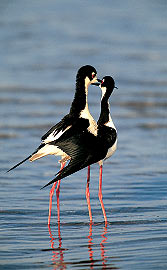 Photo: © ARTHUR MORRIS
NECESSARY ESTUARY: The brackish waters of the Indian River Lagoon are crucial staging grounds for new life. The oysters, clams, shrimp, crabs and hundreds of species of fish that are born here provide food for the many birds that patrol its waters, such as white pelicans and black-necked stilts, shown here performing a mating ritual.

That's what happened in 1988 when Lake Okeechobee choked on blue-green algae from overnutrification and went belly up. It happened again in Florida Bay, the end recipient of the lake's water. Sponges perished, sea grasses died, and the bay, a favorite recreation spot, resembled an "appalling green-pea soup," says Hurchalla. The latest sick-fish episode--witnessed by her grandson--occurred following El Niño rains and the subsequent lake dumping.

To curtail these water woes, the recovery plan calls for several giant reservoirs--each up to 12 feet deep and covering up to 5,000 acres--which would supply water to farmers during the dry season, leaving groundwater for the marshes.

A better remedy than the canal system, the reservoirs do have drawbacks, says Hurchalla. For starters, each one comes with a $9 million pump. Then there is the immense amount of dirty water concentrated within their walls. In years when rainfall is excessive and the reservoirs risk overflowing--and that's not unusual here, says Hurchalla--dumping would still occur. "Florida's problem is that there's either too much water or too little," she says. "All along we've managed it as though we always have an average amount when we should be dealing with extremes." That's why she proposed limiting the number of reservoirs by reclaiming land from marginal farms for rebirth as marshland, which would more naturally filter out nutrients and better control evaporation and flooding.

Her idea comes at a time when many South Florida farmers are not fairing well, making them more willing to sell their land at prices that make reclamation a possibility. "If these plots aren't reclaimed, they could easily end up as suburban housing tracts," says Hurchalla. This is the part that has those concerned with species protection most ecstatic: Unlike reservoirs--or an expanse of suburban lawns--restored wetlands are wildlife havens. "Saving habitat is usually considered fluff,'" says Hurchalla. "But instead of focusing on saving wading birds--much as that's needed--our solution shows the value of wetlands in a cost-effective engineer's way. It's a soft solution, with incredible wildlife benefits."

But the best may be yet to come: "We're sharing the lessons learned here with the rest of the Corps," says Army Corps Colonel Greg May. "This will be a model for wetland restoration around the country, with low-tech solutions examined first and grass-roots leaders heavily involved in the process."

Leaders like Maggy Hurchalla, who received a conservationist-of-the-year award from the Everglades Coalition in January. "She's about as effective a volunteer as I've ever seen," says Van Putten. "She is the epitome of the kind of citizen watchdog we'll need as we undertake the largest environmental restoration ever attempted--someone who will make sure that promises made are promises kept. She's the conscience of Everglades restoration."

That's something her grandson won't realize until he's older. Right now she's just a cool grandma who's teaching him how to do an "eskimo roll" in a kayak. Maybe in a few years, he'll join her on a days-long slog through the slough, with plenty of duct tape packed in anticipation of a wild adventure.

While reporting for this article, Associate Editor Heidi Ridgley kayaked with Maggy Hurchalla in the Indian River Lagoon estuary.

Using low-tech and nonstructural solutions to restore damaged ecosystems, like those conservationists are pushing for in the Indian River Lagoon estuary and other areas of the Florida Everglades, is an important part of NWF's campaign to reform the U.S. Army Corps of Engineers. NWF is attempting to redirect the Corps to become more of a partner in efforts to restore and protect aquatic habitat through use of commonsense solutions, such as saving instead of draining wetlands, storing runoff in marginal farmland and relocating people away from floodplains instead of building levees. Congress will be getting into the act later this year, when it takes up proposed legislation to reform the Corps.

Related Reading
The western Everglades are poised between the best of times and the worst of times. From the Okaloacoochee Slough headwaters to the Gulf of Mexico, the million-acre-plus expanse of cypress stands, wet prairies and pine islands remains a last wild outpost for an abundance of wildlife, including the endangered Florida panther, West Indian manatee and wood stork. But the western Everglades are imperiled by rapid expansion of urban growth upstream that could adversely alter the downstream water flow and by pending applications to convert thousands of wetland acres to other uses. To learn what five resident species are telling scientists about habitat damage and repair in South Florida, see "Listening to Wildlife in the Everglades" (National Wildlife, June/July 1998).