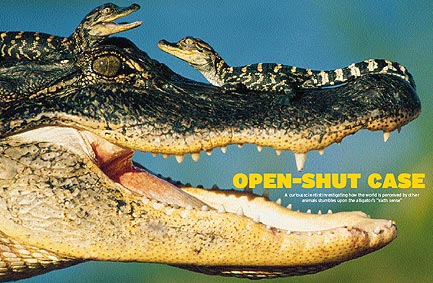 The petite, freckle-faced University of Maryland graduate student had originally set out to discern the difference between the way birds, such as barn owls, and some of their closest living ancestors, alligators, perceive sound. But she couldn’t help but also indulge herself in the mystery of those bumps. Soares never imagined that before she would even finish her graduate research, she would uncover an undiscovered alligator sense organ—in fact, the key to the reptile’s predatory prowess.

Soares was drawn to the field of neuroscience because she was curious about the ways animals sense and perceive their unique environments. When she began looking into what was known about the alligator bumps five years ago, she quickly learned that all American alligators (Alligator mississippiensis), along with the 22 other members of the crocodilian family alive today, have them.

An average 12-foot-long, 400-pound American alligator has a brain that is roughly the size of three olives.
Alligators are one of the most vocal reptilians. They growl, grunt and bark. Babies call to their mother to help them out of the nest after they hatch. Males sit at the edge of a bank and create a low-frequency sound called a bellow that makes the surface of the water dance and attracts females.
The species has the most powerful bite known to the animal kingdom. While a full-grown lion chomps with 940 pounds of force, an adult male gator delivers a crushing 2,125 pounds.
For the better part of the last century, the leather industry referred to the nodules as "pit glands," and used them to discern a croc skin from that of a gator. (Crocodiles have the characteristic bumps all over their bodies, while alligators have them only on their jaws.) A few decades ago, herpetologists started calling the nodules "integumentary sense organs," or ISOs, based on a hunch that the bumps had some sort of sensory function. Some hypothesized that they might detect salinity. Others said they might be used to sense the odor of food. Some even thought the bumps might help gators detect a suitable mate. But no one ever clearly determined the bumps’ function.

Soares decided to attempt to solve this intriguing mystery. Fortuitously, she had returned from Louisiana with a box of alligator eggs for her thesis—and, surprisingly, some babies in tow. Half of the 40 eggs had hatched during her flight home. "I was holding the box in my lap so the eggs wouldn’t break," Soares says. "Then I heard this eeewww, eeewww. I started coughing loudly so no one would know. The lady next to me looked really annoyed."

Back at her Maryland lab, she began to investigate if the raised pimplelike structures on the hatchlings’ small snapping jaws were merely pigmented spots by washing them with a dye. She found the dye was quickly sucked up by a nerve in the skin and transported to the brain, meaning "the bumps weren’t freckles," says Soares. What’s more, she adds, the part of the brain that received the dye was enormous. "And if something is big in the brain, it’s usually important. Humans, for example, have a big auditory cortex because we’re all about language. This was very exciting." 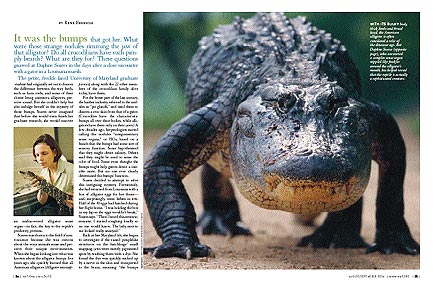 WITH ITS BULKY BODY, thick limbs and broad head, the American alligator (right) is often considered a relic of the dinosaur age. But Daphne Soares (left), who uncovered a complex sense organ stippled like freckles around the alligator’s mouth, has helped reveal that the reptile is actually a sophisticated creature.

Knowing the nerves that took up the dye had to travel through bone to reach their final destination, Soares called upon James M. Clark, a paleontologist and crocodilian expert at George Washington University, to see what the fossil record might reveal. Clark directed her to consult several museum collections that included the skulls of crocodilian fossils dating as far back as the Mesozoic era, 245 million years ago.

The crocodilian creatures ruling this "Age of the Reptiles" were a motley crew that ranged from a terrestrial, rabbit-sized sphenosuchian, with its doglike legs and the facial features of a lizard, to the fierce and aptly named "SuperCroc," or Sarcosuchus imperator. A SuperCroc unearthed by University of Chicago paleontologist Paul Sereno in 2000 is thought to have lived in sub-Saharan Africa 110 million years ago, weighed as much as ten tons and measured as long as a city bus.

Most crocodilians remaining today—mere midgets compared to the SuperCroc—go back 80 to 90 million years. From South American caimans and Cuban crocodiles to American alligators and Asian gharials, these species are found in semiaquatic habitats throughout the world’s subtropical and tropical zones.

Soares discovered that beneath the bumps on the jaws of all of these living crocodilians there is a pattern of holes, called foramina, in the shape of a beehive. Ancestral crocodilians that lived entirely on land, however, lacked the pattern. The presence of the foramina pattern in semiaquatic crocodilians suggested the reptiles had a special adaptation for spending most of their lives submerged up to their eyeballs in water. "I knew I had found this ancient organ that is important to these animals," says Soares. "But I still didn’t know what it does."

Over the course of several weeks, during a three-month fellowship in 2001 at the Marine Biological Laboratory in Woods Hole, Massachusetts, Soares introduced captive alligators to an array of potential stimulants, from ground-up fish bits to electric fields. She determined that the bumps were neither chemo-dectors nor mechanical detectors, like those that a platypus uses to find and catch shrimp. In desperation one night, she even tried stimulating the bumps with a beam of light. "Who knows," she thought, "maybe they’re like eyes." But she ended up ruling out that possibility, too.

Then one day she accidentally dropped a screwdriver into the alligators’ tank, and the animals reacted. Could the bumps be unique sensory organs that allow crocodilians to detect water ripples? The theory made sense to Soares, given these animals’ environments—shallow, muddy waters where visibility tends to be low—and the way in which they wait patiently for unsuspecting prey to float past or pierce the water’s edge with their tongues.

She tested the idea by plugging the gators’ ears, turning out the lights and releasing a drop of water into the tank. Again, the alligators responded, lunging and snapping at the air. With additional experiments, Soares confirmed that the bumps were indeed a sensory organ: tiny motion detectors triggered by water vibrations, which she renamed "dome pressure receptors," or DPRs.

Further investigations by the neuroscientist revealed that alligators are able to use the DPRs to distinguish between a morsel of prey and other water disturbances in their environment. "They’re pretty good," says Soares, standing near a tub filled with eight young gators back at her University of Maryland lab after her research was published in the journal Nature. "If an unlucky bird falls from a tree into the water, an alligator knows where it is, even in the rain."

Part of the DPR mystery still remains, however: Why do alligators have the motion detectors only around their mouths while crocodiles have them all over? Are the crocs’ bodies essentially floating antennae? Are they better at localizing prey? Soares plans to look into this.

In the meantime, the now 32-year-old scientist is focusing on how other animals, such as a blind cave fish from central and northern Mexico, perceive the world around them. These colorless fish are thought to have evolved 100 million years ago. They have eyes when they’re born, but lose them as they mature. Although adult cave fish lack vision, they have taste buds all over their bodies. "The question is," says Soares, "are they creating a world where taste defines their environment? Now that would be very exciting."

Rene Ebersole is an associate editor for this magazine.

Recovered
The High Price of Fashion

A century ago, the demand for alligator handbags, boots, belts and wallets nearly wiped out America’s most infamous reptile. Then federal authorities listed the American alligator as an endangered species in 1967, under a law that paved the way for the tougher Endangered Species Act of 1973. The listing prompted habitat protection, law enforcement to crack down on poachers and a tagging system that now tracks the trade of alligators, which were declared "fully recovered" just two decades later, in 1987. Today, more than a million gators live in the freshwater swamps, marshes, ponds and rivers of the southeastern United States. For other threatened and endangered species success stories, see the article "Where Would They Be Now?"

Scientists studying the similarities between birds and some of their closest living ancestors—alligators—recently discovered another parallel: West Nile virus. Hundreds of young alligators at farms in Georgia, Florida, Louisiana and Idaho have succumbed to the deadly virus since 2001, and last fall epidemiologists grew suspicious about alligator farms potentially aiding the spread of West Nile to humans. Since the virus was first reported in North America in 1999, West Nile has rapidly spread from New York City across the continent, killing hundreds of humans and tens of thousands of birds, mammals and reptiles.

How a virus that first began afflicting people and birds in New York City five years ago could travel so far, so rapidly and infect so many species is still largely a scientific mystery. Until recently, only crows, blue jays, magpies and a few other species of birds had been found capable of harboring enough of the virus to infect biting mosquitoes, which then deliver the disease to humans. Last fall, tests conducted by the Centers for Disease Control and Prevention (CDC) and Colorado State University added that distinction to alligators as well. The scientists found levels of West Nile virus in farmed alligators that were high enough to give biting mosquitoes an infectious dose that could spread to humans.

“Mosquitoes feed around the alligators’ eyes and other soft places,” says CDC epidemiologist Mike Bunning, who helped determine that farmed alligators, which are raised at temperatures in which the virus thrives, could serve as a reservoir for the disease. However, he says the chances of seeing an increased number of cases of West Nile virus in humans living near alligator farms are slim. “We’re on our fifth West Nile season and we haven’t had any upsurges of human outbreaks associated with alligator farms yet. Epidemiologically, it’s not a big risk.”