Sent to Iraq to cover the war, a U.S. journalist describes the loss—and possible return—of the Middle East’s greatest wetlands 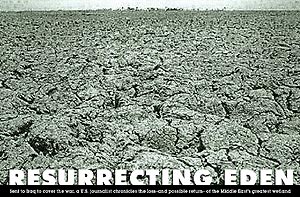 AZZAM ALWASH remembers being enchanted as a young boy by a vast water world filled with reeds that towered around him as he plied the marshes with his father. Suddenly, their little skiff would slip out of the dense vegetation into a breeze-cooled lake. Birds filled the sky, buffaloes lazed in the water and, welcoming them warmly on their island homes, were the Marsh Arabs, or the Ma’dan, 5,000-year-old heirs to the world’s first civilization. "Those were the glory days," he recalls.

Four decades and a cortege of tragedies later, Alwash, an Iraqi American engineer, has returned to the marshes of southern Iraq, but this time to scenes of utter desolation. Where the wetlands once flourished lies a barren and sand-raked moonscape. The wildlife and the unique culture of the Ma’dan are all but gone. "I have yet to see the towering reeds," he says. "It’s devastating."

"One of the world’s great environmental disasters" is how the United Nations Environment Program (UNEP) describes the destruction—through war, terror and economic exploitation—of the Middle East’s most extensive wetlands, believed by some to be the Biblical location of the Great Flood and the Garden of Eden. From satellite studies, it was UNEP that in 2001 alerted the international community to the rapid eradication of the marshes, which originally covered between 5,800 and 7,700 square miles. Today less than 10 percent of this once bountiful ecosystem remains. 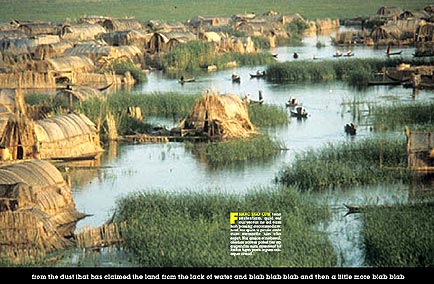 Moving with U.S. troops across southern Iraq during the war last spring, I witnessed some of this devastation firsthand. In areas where giant reeds and cattails once thrived and birds sang, rolling tanks and trucks spawned dust storms. Farmers begged soldiers to drill through salt crusts two feet thick to find water. And from atop the ziggurat at the ruins of Ur, lush home of the Biblical Abraham, the 360-degree view was of adobe huts that seemed to merge with the unrelieved tan of the earth.

But on reaching Baghdad in early May, I encountered grounds for some optimism. With gunfire still ringing through the streets and 100 years of water-flow records having been torched by looters, officials at the Ministry of Water Resources were already focusing on the possible restoration of the marshes, whose destruction is viewed as an unwanted legacy of Saddam’s regime. In one of his first moves as the ministry’s senior advisor, Eugene Stakhiv of the U.S. Army Corps of Engineers dispatched five Iraqi staffers to Al Hawizeh marsh—the most viable of Iraq’s three great wetland complexes—for a preliminary assessment and ordered the ministry to deliver enough water to at least sustain its present size. Stakhiv hopes that Al Hawizeh, which straddles the Iranian border, can provide a seedbed for the transfer of genetic material that will bring the rest of the marshes back to life.

THE UNITED NATIONS calls the destruction of Iraq's wetlands "one of the world's great environmental disasters." Before Saddam drained the marshes, they were part of the Middle East’s most important wintering area for waterbirds (such as white pelicans, above) and raptors.

Beyond helping their human inhabitants, resurrecting the wetlands would be a boon to birds and other wildlife that once took refuge there. These intermeshed freshwater lakes, marshes and seasonally inundated floodplains sprawling across southern Iraq and southwestern Iran make up the Middle East’s most important area for wintering waterbirds and raptors and are a haven for 16 globally endangered birds, including three that are endemic to Iraq.

Before humanity’s assault, a wealth of mammals were also thought to inhabit the marshes, including five globally threatened species: the gray wolf, long-fingered bat, smooth-coated otter, bandicoot rat and Harrison’s gerbil. Other mammals hurt by marsh drainage include the honey badger, striped hyena, goitered gazelle and jungle cat. The wetlands’ formerly rich aquatic life, including the endemic bunni fish, Hilsa shad and a giant catfish, has likewise been decimated both through drainage and widespread fishing by impoverished villagers wielding electrically charged rods.

According to ornithologist Richard Porter of BirdLife International, author of Birds of the Middle East, information on bird life in the marshes has been sketchy and anecdotal since the last known field survey in 1979. That year, he says, several million waterbirds, notably ducks, geese and coots, as well as thousands of raptors, were observed wintering in the marshes after flights from their breeding grounds in western Siberia. Herons and egrets (long-distance migrants headed for Africa) and other waterbirds escaping exceptionally severe weather in the Caspian region and Turkey also found refuge in Iraq.

Scientists suspect that the nation’s endemic birds, whose numbers are thought to have dropped by a third over the past decade, have been particularly hard hit. Of the Basra reed warbler, for example, Porter says: "If this bird was once widespread over 20,000 square kilometers (7,722 square miles) and now there’s only some five percent of that habitat left, the impact must be tremendous." The Iraq babbler, which favors reedbeds and riverbanks, and the grey hypocolius are also believed to be in rapid decline.

Researchers likewise know little about the slender-billed curlew, with several expeditions having failed to even find the Siberian breeding grounds of this critically endangered bird. But Porter says he has "a hunch" that the curlew may still winter in the marshes. The wetlands are also critical to the long-term survival of species ranging from the imperial eagle to the dalmatian pelican and marbled teal, all once prospering citizens of an idyllic aviary.

Eden’s destruction may have begun as early as 1951, when British engineers outlined a blueprint for extending farmland by draining the marshes and extracting rich oil deposits beneath them. But systematic drainage started only in the early 1990s with the construction of dams, dikes and canals to stop the waters of the Tigris and Euphrates Rivers from flowing into the wetlands. Within less than a decade this ancient marsh ecosystem—and a millennia-old society—collapsed.

When Saddam was ousted, Alwash and others were waiting for just such an opportunity. Last fall, the 45-year-old exile gave up a lucrative job in California to work full time at the Herculean task of reviving the marshes. He calls the effort, started in 2002 by Iraqi expatriates, the Eden Again Project.

According to Alwash and other experts, fully restoring the wetlands is a delicate, expensive and highly technical process that could take decades. Before reflooding can even begin, the land must be cleansed—of pollution from agriculture and industry, poisonous chemicals, wartime mines and explosives. Soils and sediment beds have to be tested: Torching the marshes may have rendered some soil too alkaline or acidic for reclamation. 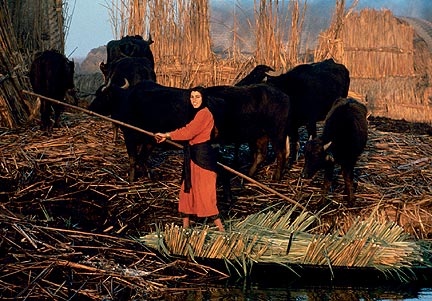 A HAVEN for people and wildlife, the marshes were home to up to half a million Ma’dan, or Marsh Arabs (woman, above), who lived much the way their ancestors had. But when Saddam Hussein destroyed their homes and environment—in addition to killing many Ma’dan and driving away the survivors—the number dropped to about 40,000 people.

For Alwash, several swaths of degraded marshland will become a laboratory to test hydrological models. Water, of course, is key to every equation, but how much, when, how and what quality are complex variables. Wetlands, says University of Florida wetlands ecologist Thomas Crisman, are not like coffee where you can just add water. Past data are also scant since such records were state secrets under Saddam’s rule. Scientists therefore may have to rely on wetlands restoration experiences in places such as the Florida Everglades and California’s Sacramento-San Joaquin River Delta.

But reviving Iraq’s marshes will undoubtedly prove far more difficult than those efforts. Crisman, who worked in the Everglades, notes that the project was favored with good water inflow, a multiyear plan, a solid databank and hefty federal funding. Iraq has none of these advantages and must additionally resolve serious post-war security problems, competing interests of farmers and oilmen and, perhaps most formidable of all, a potential "water war" with its neighbors. In the 1990s, with Iraq isolated internationally, Turkey, for example, went on a dam-building spree that included one dam, the Attaturk, capable of storing three years of the Euphrates’ flow. The long-term future of the marshes will depend on equitable sharing of water among Turkey, Iraq, Syria and Iran as well as political will in Baghdad.

Alwash asserts that such will exists, that Iraq’s provisional government regards the restoration of the marshes as a way to restore justice and wipe out traces of the past. Concretely, a center within the Ministry of Water Resources has been asked to coordinate several groups poised to enter the country once security improves, including UNEP, the U.S., Italian and Danish governments and BirdLife International.

Even before these foreign players arrive, locals are taking matters into their own hands. Soon after the war ended, UNEP satellite images showed inundation in some formerly dry areas as villagers opened floodgates, breached dikes and stopped pumping stations from draining water.

"I have always thought there was hope," says Alwash, who left Iraq in 1978 with his father, an irrigation engineer, then earned a doctorate from the University of Southern California and became involved with saving the Iraqi marshes with his wife Suzanne, a geologist.

Recently, Alwash telephoned his home in California to describe a return to one of the areas that had begun to recover. He explored the marsh in an oar-powered boat, past reed beds that were growing again, some reaching a few feet above the water. "I told my wife that for the first time in Iraq I listened to the sound of silence,’’ he says. "Then I heard the wind rushing through the plants and the sound of birds. It was magical, almost religious."

Denis D. Gray is an Associated Press reporter based in Bangkok, Thailand.